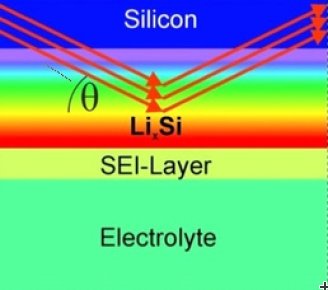 Theoretically, silicon anodes could store ten times more lithium ions than the graphite anodes, which have been used in commercial lithium batteries for many years. But so far, the capacity of silicon anodes has dropped sharply with each additional charge-discharge cycle. Now, an HZB team with neutron experiments at the BER II in Berlin and at the Institut Laue-Langevin in Grenoble has clarified what happens on the surface of the silicon anode during charging and which processes reduce the capacitance.

“Using the neutron experiments and other measurements, we were able to observe how a blocking layer forms on the silicon surface during charging, which hinders the penetration of lithium ions,” explains HZB physicist Dr. Ing. Sebastian cracks. This layer consists of organic molecules of the electrolyte liquid and inorganic components. When charging, this 30-60 nanometer thin layer partially dissolves again, so that the lithium ions can penetrate into the silicon anode. For the dissolution of the layer energy is needed, which is then no longer available for storage. The physicists used the same electrolyte fluid that is also used in commercial lithium batteries.

After preliminary investigations of the neutron source BER II of the HZB, the experiments at the institute Laue-Langevin (ILL) in Grenoble brought the exact insight into the processes. “At the reactor of the ILL, cold neutrons with a very high flux are available, with which we were able to observe the silicon anode non-destructively during several charging cycles,” explains Risse. Using a measuring cell developed at the HZB, physicists were able to use neutrons to examine the silicon anodes during charge-discharge cycles (in operando), as well as to record a range of other measured values ​​such as impedance with impedance spectroscopy.

Once this blockade layer is dissolved, the efficiency of the charge-discharge cycles increases to 94 percent, (94% of the stored charge can be delivered again). This value is higher than that of lead acid batteries (90%), but slightly lower than that of technically advanced lithium-ion batteries, which reach up to 99.9%.

“We now want to investigate whether applying a very thin protective layer of metal oxide can prevent the formation of the blocking layer, so that the capacity of silicon anodes decreases less over many charge-discharge cycles,” says Risse.