Jülich/Garching, 13 May 2016 – An international research team has discovered the mechanism by which a pharmaceutical excipient from the class of block copolymers improves the solubility of large quantities of a poorly water-soluble active substance. The results form the basis for the development of a drug delivery system better tolerated by the human body. (Macromolecular Chemistry and Physics, DOI: 10.1002/macp.201500465.)

Medicines are usually made up not just of the actual pharmaceutical substance but also of added excipients. These allow, for example, the drug to be administered in the first place, or improve its bioavailability. The cytostatic drug paclitaxel, for instance, is administered intravenously in the treatment of breast cancer. Without an excipient, only a single milligram of the drug is soluble in a litre of water. In comparison, with the right excipient, up to 500 milligrams of the drug can presently be administered in a litre of transfusion fluid.

More efficient excipients would be preferable, as not only active ingredients but also excipients may be poorly tolerated and can trigger side effects. Even a reduction in the volume of the infusion is of benefit to the patient. Already in 2014, some of the researchers in the team discovered that special polymers could dissolve up to ten grams of paclitaxel per litre of fluid. The thread-like triblock copolymers, known as poly(2-oxazoline), are made up of three parts: a water-repellent (hydrophobic) part in the middle and two water-receptive (hydrophilic) ends. Thus they act in a similar way to a soap molecule and bind together aqueous with poorly water-soluble substances.

Contrary to expectations however, polymers with strongly hydrophobic midsections are able to dissolve significantly fewer active substances than polymers with only a weak hydrophobic midsection. Structural research undertaken by the scientists from Jülich, Dresden, Garching, Würzburg and Montpellier now suggest that the reason for this lies in the different formations that the molecules build together with paclitaxel. With the aid of neutron small angle scattering at an instrument of the Jülich Centre for Neutron Science (JCNS) at the Heinz Maier-Leibnitz Zentrum in Garching, the researchers investigated which molecular structures are formed when polymers are mixed with water and paclitaxel.

At reduced drug concentrations, in both cases small polymer spheres are formed. At their surfaces in contact with the water are the hydrophilic parts of the polymers, whereas in the inner part of the spheres the hydrophobic as well as the paclitaxel molecules are to be found. The amount of space in the interior of the spheres is however limited. When this is full, the polymer spheres with their strongly water-repellent core cannot absorb any more of the active substance. However, the spheres with a weakly water-repellent centre continue to store paclitaxel molecules at the interface between the polymer sections. The sphere then resembles a raspberry in shape.

“With these studies we have found a way to drastically improve the relation between active ingredients and excipients or solvents,” explains Dr. Sebastian Jaksch from JCNS (formerly from the Technical University of Munich). “As the hydrophobicity of polymers can be adjusted specifically, it is possible to transfer the mechanism to other active substances.”

Jaksch furthermore assumes that the raspberry structure will offer improvements in the bioavailability of the active substances. Paclitaxel could be more easily released at the point of delivery than if it is locked deep (or “encapsulated”) within a hydrophobic sphere. “The clinical effectiveness must of course first be investigated,” emphasized Dr. Jaksch. In principle, the polymers studied are known to be comparatively well tolerated. If results turn out to be positive, then hopefully the infusion bags used in paclitaxel therapy could soon become smaller, to the benefit of the patients. 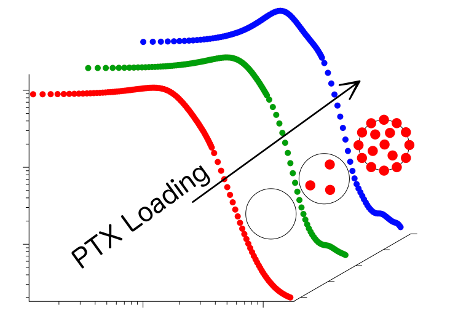