Boron neutron capture therapy is back on the agenda 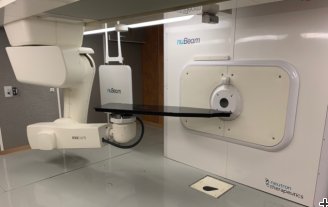 Boron neutron capture therapy (BNCT), a technique that deposits highly targeted radiation into tumour cells, was first investigated as a cancer treatment back in the 1950s. But the field remains small, with only 1700 to 1800 patients treated to date worldwide. This may be about to change.

“The field of BNCT seems to be progressing rapidly at the moment,” said Stuart Green, director of medical physics at University Hospital Birmingham. “The big difference compared with five or ten years ago is that the commercial interest from a variety of companies is strong now and this is driving the field.”

BNCT is a two-stage treatment. First, a 10B-containing drug (most commonly boronophenylalanine) is infused into the patient’s bloodstream. After a couple of hours, the drug accumulates preferentially in tumour cells and starts to wash out of healthy tissues. At this point, the tumour target is irradiated with low-energy neutrons, which split the 10B atoms into alpha particles and 7Li ions – highly ionizing particles that are delivered directly into the cancer cells.

“BNCT is high-LET [linear energy transfer] radiotherapy targeted at the cellular level,” Green explained. As neither the neutron beam nor the drug are toxic by themselves, damage to healthy tissue is minimized. “BNCT is relatively safe compared with administering radioactive drugs or chemotherapy, where toxicity may be experienced all around the body.”

Speaking at the Medical Physics & Engineering Conference (MPEC), Green updated on the status of BNCT programmes worldwide, noting that clinical experience is continually increasing. The US Food and Drug Administration has now approved two boron drugs for clinical use. But by far the majority of treatments, over 1150 to date, have taken place in Japan, initially using the Kyoto University Reactor in the early 2000s, and more recently using three Sumitomo accelerator systems in Kyoto, Fukushima and Osaka.

“Very importantly, earlier this year we had the first ever medical device approval for BNCT, for treatment in Japan of recurrent head-and-neck cancer,” said Green. “This is a significant marker for the entire field.”

The Sumitomo BNCT system is the first approved accelerator-based BNCT system in the world. (Courtesy: Shin Masui, Sumitomo Heavy Industries)
Several BNCT clinical trials are now underway in Japan using these accelerator-based facilities. A work-in-progress study examining one-year survival in patients with recurrent malignant glioma is showing promising initial results. Another trial, which formed the basis of the approval by the Japanese Medical Agency, examined three-month response rates of patients with unresectable local recurrent head-and-neck cancer. This approval should enable the team to start treating patients on a routine basis.

In Finland, meanwhile, around 250 patients have been treated using neutrons from a research reactor. This reactor closed in 2012, but Helsinki University Hospital is currently working with Neutron Therapeutics (which originated from MIT) to commission an accelerator-based BNCT facility. Clinical trials at this facility were planned to begin late in 2020 (now delayed due to the pandemic), initially examining recurrent head-and-neck cancer followed by glioblastoma and other indications.

The previous treatments in Finland included many patients with locally recurrent head-and-neck squamous cell carcinoma – a difficult-to-treat cancer that recurs in almost half of cases. Green described a recent US-based study looking at conventional retreatments of this disease. Patients retreated with intensity-modulated radiotherapy had an overall survival of 13.3 months, with 1.8% experiencing grade 5 toxicity (death); those receiving stereotactic body radiation therapy had 7.8 months overall survival with 0.5% grade 5 toxicity. In contrast, the (so far unpublished) Helsinki data showed that BNCT of similar cases conferred an overall survival of 25 months, with zero occurrences of grade 5 toxicity.

Elsewhere, Chinese company Neuboron is constructing a BNCT Centre at the Xiamen Humanity Hospital in China, with plans for other facilities in the future. These facilities will be based around a relatively compact accelerator-based neutron source designed by US firm TAE Life Sciences.

Green also described recent developments in the UK, where the University of Birmingham has received a £9m award from the EPSRC funding agency to develop a high-power neutron source. The source is slated mainly for testing and research into nuclear materials, but will also act as a user facility for other communities needing high-intensity neutron irradiation.

The source, which will be situated next to the university’s medical physics building, could be used to test new boron compounds in cells, for example, as well as to perform dosimetry, beam characterization and imaging studies. Green notes that builders arrived on site in the last few weeks, with accelerator delivery planned for August 2021 and full operation scheduled for February 2022.

The other big news in the BNCT field, said Green, is the collaboration between oncology software specialist RaySearch and various BNCT companies, including Neutron Therapeutics, Sumitomo and TAE Life Sciences. “RaySearch has taken on BNCT and is producing treatment planning tools to help us bring it into our clinical work,” he said.

“For the first time, there’s a substantial and sustained effort in the commercial sector to drive this field forward,” Green concluded. “We should keep an eye on BNCT over the next few years, there’s a lot happening, and hopefully our community can play a key role.”