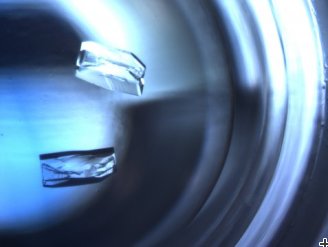 A proton transfer or protonation of certain molecular groups is usually essential for the functioning of biological molecules such as enzymes or antibodies. Unlike many other structural resolution techniques neutrons can distinguish protons very well by other building blocks. In combination with other methods of investigation, scientists have recently made amazing results with the instrument BIODIFF at MLZ. Yet biologists do not use this most useful measure very often because it requires that the biomolecule to be examined is in crystalline form. In addition, these crystals must have a minimum volume, which in many biologically relevant molecules is a major challenge. The crystallographer have done a great job in this case and bred with the small amount of 7 mg protein sufficiently large crystals that have made possible the neutron experiment.

Combined with ultra-high-resolution X-ray crystallography
Four scientists from Sweden (Mats Ohlin, Laura von Schantz, Derek T. Logan and Zoe S. Fisher) had already identified the key components of the carbohydrate- hydrolyzing enzymes that are responsible for their specific mode of action. They came to the MLZ already with a complete data set from X-ray crystallography and supplemented their existing results by neutron diffraction analysis at the instrument BIODIFF. For this purpose some of the hydrogen atoms had to be replaced by deuterium. Neutrons can distinguish directly and with high resolution between hydrogen and its isotope deuterium. Unlike X-rays, neutrons moreover can also determine the position of hydrogen or deuterium atoms, which have an increased mobility, which is often the case in the proton transfer reactions or in water molecule networks. With the help of the software PHENIX, that uses both records simultaneously in the structure refinement, it was possible to reveal the details of the hydrogen bonded water network around the active site required for the function. For the first time a neutron diffraction analysis of this important class of compounds succeeded which also has a large economic value. Although their exact reaction mechanism is not yet clear, they are for example used industrially as enzymes for biodiesel production and in refineries. The findings can be used in the future to produce tailor-made enzymes for these industrial processes that operate more efficiently.

Combined with Nuclear Magnetic Resonance
So far no scientist has combined structure resolution neutron diffraction with the nuclear magnetic resonance for the determination of pH-dependent effects in enzymes. The physicists and biologists made up in a transatlantic cooperation and were able to clarify an important process: Namely, how the proton transfer in the biologically important enzyme carbonic anhydrase allows the hydration of carbon dioxide to bicarbonate.
Proton transfer reacts extremely sensitive to a number of factors such as pH, electrostatics and the correct geometry at the active site of the enzyme. The scientists studied the mechanism by using carbonic anhydrase, as this represents an entire group of ubiquitous enzymes that are essential in the human body for many processes, such as respiration. The carbonic anhydrase passes protons quickly and efficiently through a number of hydrophilic amino acid side chains which coordinate a highly ordered hydrogen-bonded water network.
The international group of researchers combined for the first time nuclear magnetic resonance experiments (NMR) with neutron protein crystallography in order to investigate the effect of pH and divalent cations during proton transfer in the human carbonic anhydrase II. The scientists studied with neutrons the protonation of eight tyrosine bases at different pH values in the crystallized carbonic anhydrase and in addition by the method of nuclear magnetic resonance (NMR) in solution. So they won valuable insights how the proton transfer can take place at a physiological pH values. Since similar effects probably occur in other enzyme systems, these results are transferable and very useful for bioinformatics, which can only provide reliable results if the position of hydrogen atoms precisely experimentally is determined. The results of the scientists therefore have far-reaching implications for our understanding of proton transfer and how subtle changes of partial charges and how hydrogen bonding can modulate the enzyme catalysis.