Jülich/Garching, 23 March 2016 – The internal movements of proteins can be important for their functionality; researchers are discovering more and more examples of this. Now, with the aid of neutron spectroscopy, dynamic processes have also been detected in so-called "LOV photoreceptors" by scientists from Jülich, Aachen, Dusseldorf and Garching near Munich. These proteins are widely distributed throughout nature and are of biotechnological relevance. The results highlight the immense potential of neutron scattering experiments for the analysis of cellular processes. The research has recently been published in "Biophysical Journal" (DOI:10.1016/j.bpj.2016.01.021).

LOV proteins are very popular with molecular biologists; with their help, it is possible to turn biological processes on and off almost at the flick of a switch. When coupled with other proteins, it is possible to control these proteins with light, and to study the metabolic processes in the modified cells. The rather emotional-sounding name of this biological switch has a mundane origin; it is merely an acronym for light, oxygen and voltage – its full name being “flavin-binding light, oxygen, voltage photoreceptor”.

In nature, light-sensitive protein molecules stimulate biological processes, for example, the growth of plants towards light and the production of photosynthesis pigments in bacteria, when light falls on them. Their wide distribution in nature and their technological usefulness result partly from the fact that they function in a modular way: the switching function can be combined with many other processes.

The first experiments on LOV proteins using neutron scattering at the Heinz Maier-Leibnitz Zentrum in Garching have now shown the importance of the internal movements of these biomolecules for their functionality. The scientists analysed one such receptor from the soil bacterium Pseudomonas putida with a temporal resolution on the nano- and picosecond timescales. “We found more intense movements in unexposed proteins than in those exposed to light”, explained Dr. Andreas Stadler of the Institute of Complex Systems and Jülich Centre for Neutron Science at Forschungszentrum Jülich. “The exposed version is stiffer, especially in certain specific areas.”

In order to find out which areas of the protein are in motion, the researchers compared their neutron analyses with structural information already obtained from X-ray experiments with crystallized LOV proteins, and then simulated possible movements on a computer. This was necessary because neutrons are not able to register the movements of individual parts of protein molecules, but only the averaged movements of all proteins in the sample. For this reason, further experiments are always needed to ensure the correct interpretation of results. “If used appropriately, as in this case, neutrons can demonstrate their full capabilities and provide unique insights into the functions of biological processes,” enthused Stadler.

In the case of the LOV proteins analysed, it was already understood that two protein molecules would together form a functional unit. Their shape, in an active exposed state, looks a little like a rabbit’s head with pointed ears. In their non-active, non-exposed state, the “rabbit ears” hang downwards. The movements which the researchers have now discovered in the non-exposed proteins coincide exactly with the idea that this state is more flexible and mobile, whereas the upright “ears” are indeed stiffer and more rigid.

From earlier experiments, it was also already clear that the light-active centre was located in the “cheek” area of the protein’s “rabbit head”. On exposure to light, a chemical bond results between the light-active centre and a particular position on the protein backbone. The scientists now assume that the creation of this bond leads to structural alterations, which spread through the protein up to the “ears”, triggering their stiffening and simultaneous twisting. The “ears” presumably constitute the actual switch, which can activate or deactivate the interconnected proteins.

Neutrons offer numerous advantages over other methods in the analysis of proteins, and can provide significant complementary information. Proteins do not have to be dyed, crystallized, or altered in any way in order to perform experiments on them. Moreover, the process is very gentle on the samples, which can then be observed for longer time periods. Last but not least, light atoms in molecules such as hydrogen, for instance, can be detected more easily, even in the natural environment of proteins – aqueous solutions. 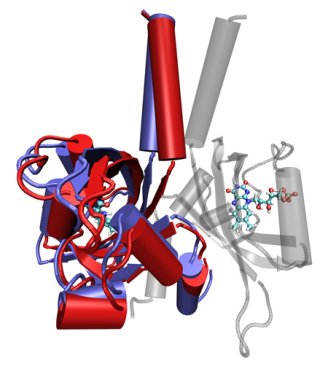 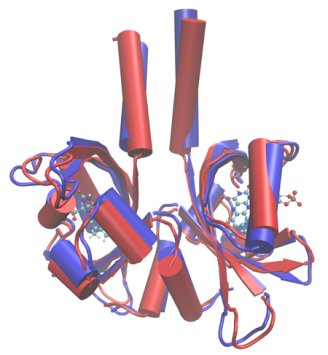