Cladding tubes and their properties 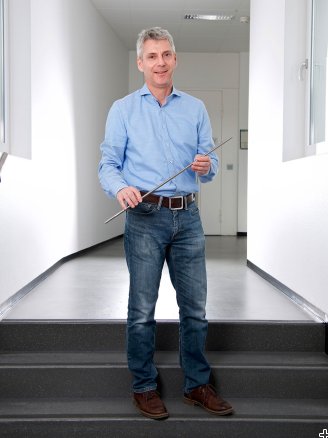 Cladding tubes and their properties Johannes Bertsch with a cladding tube: At PSI the scientist studies the safety of these components, which are used in nuclear power plants worldwide.

One of the broad research areas at PSI covers the topic of energy. Part of that, in turn, is the research for nuclear energy and safety. And one of the research groups based here is engaged with nuclear fuels. Johannes Bertsch is the head of this group and investigates the importance of so-called cladding tubes and their protective layers.

Johannes Bertsch could probably sketch the construction of a nuclear power plant blindfolded, especially when it comes to the core of the plant: How many fuel rods, made of what materials, are arranged in how many bundles. He has the numbers, dimensions, and facts in his head. He is the head of the Research Group for Nuclear Fuels at PSI, and his area of expertise are the sheaths of the fuel rods: the so-called cladding tubes.

The cladding tubes enclose the energy source of the power plant, the fissile uranium. In other words: The uranium is pressed into tablet-shaped ceramic pellets which are then stacked inside the cladding tubes. Typically four metres long, the cladding tubes have a diameter of one centimetre and a wall thickness of only 0.6 millimetres – so these are very long tubes, about as big around as a finger, with thin walls made of a special alloy. In the core of a nuclear power plant, there are typically several tens of thousands of them.

The cladding tubes are designed to withstand high temperatures and pressure during operation; they should not develop any cracks even after the removal of the spent fuel rods from the reactor, and they should survive transport undamaged – first to an interim storage facility and later to permanent storage. Therefore the cladding tubes aren’t made from just any sheet metal, but rather from a very finely balanced metal alloy: to 98% zirconium are added well thought-out amounts of chromium, iron, nickel, niobium, and tin. This special alloy is manufactured using a process just as special: melted, cooled in a controlled way, drawn, hammered and annealed. The result is a metal that, viewed microscopically, consists of tiny crystalline grains whose size is just as optimised as their internal crystalline orientation. “There are decades of research and optimisation behind that”, Bertsch says.

The hydrogen itself comes from the water that – at least in the Swiss nuclear power plants – is essential. During operation, water continuously surrounds the fuel rods, cools them, and removes the heat arising from the fission of the atomic nuclei. This creates steam that drives the large turbines by which, ultimately, the nuclear power plant produces electricity.

So there’s no way to avoid the hydrogen. But what happens when the small atoms of hydrogen wangle their way into the atomic lattice of the metal alloy?

“First, the hydrogen is dissolved in it”, Bertsch says. Although these are single atoms in a solid material, the researchers talk about it as a solution. “It is actually like sugar in coffee”, Bertsch continues. “And from the coffee, you know: If it’s too much sugar, or if the coffee is too cold, the sugar does not dissolve any more, and it accumulates on the bottom of the cup.”

Here the analogy ends; there is no bottom of the cup. What actually happens: The hydrogen no longer moves freely through the material, but instead chemically bonds with the metal atoms to form a hydrogen-metal compound. A hydride, as the researchers call it.

The problem with these hydrides: “They form elongated, platelet-like, criss-crossing structures in the metal of the cladding tube. And these are weak points in the material.”

The PSI researchers who work with Johannes Bertsch concern themselves with everything related to these hydrides. How do they alter the stability of the material? How can they be minimised? How can it be ensured that all cladding tubes stay intact at all times? “We are expanding the knowledge that exists in this context”, Bertsch says.

To do that, he and his colleagues rely on a method of imaging by means of neutrons. Neutron imaging, as it is called, is a method that was perfected at PSI and is regularly carried out by one of PSI’s own research groups at the local neutron source SINQ, with one of the world’s best neutron microscopes. With it, the most diverse types of objects can be examined.

Zirconium is virtually transparent for neutrons. That accounts for its use as the main component of the cladding tubes, since in the operation of a nuclear power plant, free neutrons are a desirable product. In addition, this proves to be an advantage in neutron imaging, because unlike zirconium, hydrogen reveals itself in neutron images as a dark contrast.

In one of their newest research projects, Bertsch’s research group is studying the additional protective layer on cladding tubes: So-called liners are used worldwide, and particularly in Switzerland. They protect the cladding tubes against mechanical damage and against oxidation.

Liners, Bertsch and his colleagues found, have a positive side-effect in eliminating hydrides: Cladding tubes equipped with such a protective layer exhibit less hydrides underneath. “The hydrogen penetrates more and more into this layer and already gets stopped there”, says Bertsch, summarising the research results. “You can say the liner is like a sponge for the hydrogen.” It’s as if a person in a bathrobe were to walk in drizzling rain: The terry cloth soaks up the water, and the skin stays dry.

Since it is already clear that hydrides weaken the cladding tubes mechanically, the researchers now venture the cautious statement that the liners, which were introduced originally for other reasons, probably make the cladding more stable in the long run.

“Ultimately, it’s our job to better understand how to make the operation and the handling of spent fuel rods even safer”, Bertsch says. “To do that, we investigate the details of the material’s internal structure. How the hydrides arise, how they are distributed, how they weaken the material – and above all, how they can be minimised.”

The comprehensive research on hydrides that Bertsch and his team are engaged with is first and foremost aimed at ensuring the safety of the nuclear facilities in Switzerland. But their work also meets with great interest internationally. “We get inquiries from Germany, where the reactors are now being shut down, and we have already been invited to the USA”, Bertsch relates. “Hydrides in cladding tubes are actually a hot topic in the research world.”