Clarifying the Role of Vitamin E

Using neutron beams at the CNBC, scientists gather direct molecular-level evidence for the role that Vitamin E plays in the human body—a feat that has been unattainable using other experimental techniques. 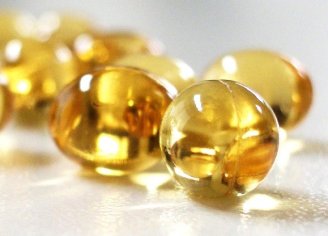 Scientists have debated the molecular function of Vitamin E for decades. Clinical tests on Vitamin E supplements have yet to show a net health benefit, and in fact some studies suggest taking too much produces negative effects.

The exact role it plays in human health remains unknown, largely because this vitamin is difficult to observe in action. Thus, studies have often been inconclusive or have produced contradictory results.

We do know that Vitamin E is essential to human health. Indeed, without a basic amount of it, people develop deficiency disorders. Fortunately, since our bodies store this particular vitamin for long periods of time, a healthy diet easily provides this basic amount.

We also know that Vitamin E is an effective preservative for many of the oily substances we encounter every day. It is often added to shampoos, lotions, and even processed foods to boost shelf-life. In these applications, it acts as an anti-oxidant that protects the oily molecules from damage caused by unstable molecules called ‘free radicals.’ Free radicals attack oil molecules and eventually break them down—the same process that causes a fish fillet to smell rancid shortly after its best-before date.

Conventional wisdom suggests that Vitamin E might play the same ‘preservative’ role in the human body by protecting the oily parts of cell membranes. Because damage to membranes over time could lead to various age-related conditions, researchers have long looked for evidence that Vitamin E supplements might reduce certain aging effects. However, lack of success in finding such evidence, combined with doubt as to whether Vitamin E could effectively act as an anti-oxidant at the low concentrations found in the human body, have led some scientists to take a closer look at this conventional wisdom.

Professor Thad Harroun is one such scientist. In order to pinpoint what function Vitamin E actually serves in the human body, Harroun and his research team at Brock University accessed the neutron beamlines at the Canadian Neutron Beam Centre (CNBC). Specifically, the researchers wanted to see, on the molecular level, how Vitamin E interacts with a cell’s lipid bilayer (the structure that forms the cell membrane and provides a protective barrier around the cells of living organisms). Neutron diffraction was able to provide insights into the location and orientation of Vitamin E molecules within the lipid bilayer with molecular-level precision—something few other techniques can replicate in a membrane environment.

After collaborating with other research groups in Canada and the U.S. to compare results from complementary experiments and computer simulations, Harroun’s team published a landmark study in 2013 that provided strong evidence for an anti-oxidant mechanism in Vitamin E. Specifically, they found that Vitamin E is well positioned to act as a first line of defence against free radicals, namely because the portion of the Vitamin E molecule that attacks free radicals is located near the surface of the cell membrane. This positioning makes it particularly effective at neutralizing free radicals, which originate from outside the membrane.

After neutralizing a free radical, a Vitamin E molecule is chemically altered. Once again, its near-surface positioning plays a beneficial role, making it readily available for other molecules outside the membrane (e.g., Vitamin C) to recycle it back into its original form so it can defend the membrane again. “It’s a very efficiently designed system,” observes Harroun, “which is why it can be effective even though our bodies retain in our membranes only a small portion of the Vitamin E we consume.”

Harroun’s team has also shed some much-needed light on why other studies on Vitamin E have given conflicting results. In 2014, the team published a paper that examined Vitamin E in one lipid bilayer system known as ‘DMPC,’ which for decades has been used by biophysicists to study Vitamin E’s role in the body. However, Harroun’s team found that the DMPC system inadequately mimics living cell membranes for the purpose of studying Vitamin E. In fact, in these bilayers this vitamin locates right in the centre of the bilayer, instead of near the surface.

Further findings made by the team have bolstered the case for the anti-oxidant role of Vitamin E. For example, a 2015 paper examined Vitamin E in several different kinds of lipid bilayers because the membranes around different kinds of cells (e.g., in brain, blood, and muscle cells) are all slightly different. Notably, Harroun’s team found that Vitamin E was located near the surface of the membranes in all cases examined, providing even more molecular evidence for Vitamin E’s role as an efficient anti-oxidant.

Notably, this efficiency means that the amount of Vitamin E found in a healthy diet is sufficient to protect the lipid bilayers of cell membranes. Indeed, taking more Vitamin E will not reverse damage to the interior of cell membranes, especially since the molecular evidence suggests that Vitamin E doesn’t spend much time there.

“We’re saying the conventional wisdom is correct. Vitamin E is an anti-oxidant, but it’s not more than that,” cautions Harroun. “Vitamin E helps protect the Omega-3s and Omega-6s that we should be eating, but there’s no molecular evidence that it prevents cancer or heart disease.”