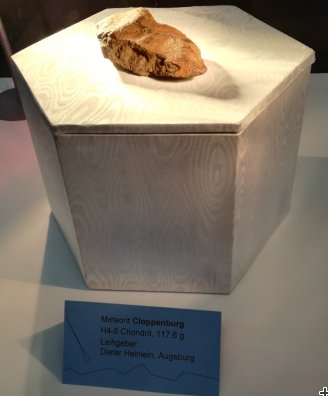 Cloppenburg The meteorite was first presented to the public during Mineral Days. © Dr. X. Li / TUM

Cloppenburg is a city in Lower Saxony and therefore namesake for a strange stone, which was there already found in March 2017. Experts from the German Aerospace Center (DLR) were able to confirm beyond doubt that this is a piece of meteorite from the asteroid belt between Mars and Jupiter.

He was named after his locality Cloppenburg and is 4.5 billion years old. However, the student Nicholas Leister and his supervisor Dr. Xiaosong Li at the FRM II noticed that there is evidence of very strong terrestrial weathering, so the rock has already hit the earth long ago. As part of the TUM Kolleg, they examined different meteorites in their elemental composition using the Neutron Activation Analysis (NAA) at the Munich Radiochemistry (RCM) after the samples had previously been irradiated at the FRM II. Among them was the 49th German meteorite “Cloppenburg”. “Unfortunately, this has been an ordinary type H chondrite without chemical abnormalities, including trace elements,” Dr. Li regrets. Most meteorites are chondrites; the name comes from their content of silicate beads (chondrules). The type H is characterized by the high iron content (high iron) of 22-30%.

The first research result was already presented at the DFG symposium in autumn 2017. The individual results of all examinations are to be published in a journal. The public was allowed to admire this “youngest” meteorite already in October at the Mineralientage in Munich, the Munich Show.