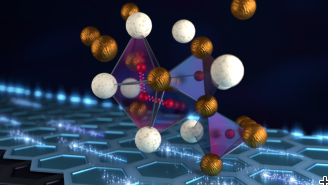 Closely spaced hydrogen atoms could facilitate superconductivity in ambient conditions Smaller spacings between the atoms in a metal hydride might allow packing significantly more hydrogen into the material to a point where it begins to superconduct. Credit: ORNL/Jill Hemman

An international team of researchers has discovered the hydrogen atoms in a metal hydride material are much more tightly spaced than had been predicted for decades — a feature that could possibly facilitate superconductivity at or near room temperature and pressure.

Such a superconducting material, carrying electricity without any energy loss due to resistance, would revolutionize energy efficiency in a broad range of consumer and industrial applications.

The scientists conducted neutron scattering experiments at the Department of Energy’s Oak Ridge National Laboratory on samples of zirconium vanadium hydride at atmospheric pressure and at temperatures from -450 degrees Fahrenheit (5 K) to as high as -10 degrees Fahrenheit (250 K) — much higher than the temperatures where superconductivity is expected to occur in these conditions.

Their findings, published in the Proceedings of the National Academy of Sciences, detail the first observations of such small hydrogen-hydrogen atomic distances in the metal hydride, as small as 1.6 angstroms, compared to the 2.1 angstrom distances predicted for these metals.

This interatomic arrangement is remarkably promising since the hydrogen contained in metals affects their electronic properties. Other materials with similar hydrogen arrangements have been found to start superconducting, but only at very high pressures.

“Some of the most promising ‘high-temperature’ superconductors, such as lanthanum decahydride, can start superconducting at about 8.0 degrees Fahrenheit, but unfortunately also require enormous pressures as high as 22 million pounds per square inch, or nearly 1,400 times the pressure exerted by water at the deepest part of Earth’s deepest ocean,” said Russell J. Hemley, Professor and Distinguished Chair in the Natural Sciences at the University of Illinois at Chicago. “For decades, the ‘holy grail’ for scientists has been to find or make a material that superconducts at room temperature and atmospheric pressure, which would allow engineers to design it into conventional electrical systems and devices. We’re hopeful that an inexpensive, stable metal like zirconium vanadium hydride can be tailored to provide just such a superconducting material.”

Researchers had probed the hydrogen interactions in the well-studied metal hydride with high-resolution, inelastic neutron vibrational spectroscopy on the VISION beamline at ORNL’s Spallation Neutron Source. However, the resulting spectral signal, including a prominent peak at around 50 millielectronvolts, did not agree with what the models predicted.

The breakthrough in understanding occurred after the team began working with the Oak Ridge Leadership Computing Facility to develop a strategy for evaluating the data. The OLCF at the time was home to Titan, one of the world’s fastest supercomputers, a Cray XK7 system that operated at speeds up to 27 petaflops (27 quadrillion floating point operations per second).

“ORNL is the only place in the world that boasts both a world-leading neutron source and one of the world’s fastest supercomputers,” said Timmy Ramirez-Cuesta, team lead for ORNL’s chemical spectroscopy team. “Combining the capabilities of these facilities allowed us to compile the neutron spectroscopy data and devise a way to calculate the origin of the anomalous signal we encountered. It took an ensemble of 3,200 individual simulations, a massive task that occupied around 17% of Titan’s immense processing capacity for nearly a week—something a conventional computer would have required ten to twenty years to do.”

These computer simulations, along with additional experiments ruling out alternative explanations, proved conclusively that the unexpected spectral intensity occurs only when distances between hydrogen atoms are closer than 2.0 angstroms, which had never been observed in a metal hydride at ambient pressure and temperature. The team’s findings represent the first known exception to the Switendick criterion in a bimetallic alloy, a rule that holds for stable hydrides at ambient temperature and pressure the hydrogen-hydrogen distance is never less than 2.1 angstroms.

“An important question is whether or not the observed effect is limited specifically to zirconium vanadium hydride,” said Andreas Borgschulte, group leader for hydrogen spectroscopy at Empa. “Our calculations for the material—when excluding the Switendick limit—were able to reproduce the peak, supporting the notion that in vanadium hydride, hydrogen-hydrogen pairs with distances below 2.1 angstroms do occur.”

In future experiments, the researchers plan to add more hydrogen to zirconium vanadium hydride at various pressures to evaluate the material’s potential for electrical conductivity. ORNL’s Summit supercomputer—which at 200 petaflops is over 7 times faster than Titan and since June 2018 has been No. 1 on the TOP500 List, a semiannual ranking of the world’s fastest computing systems—could provide the additional computing power that will be required to analyze these new experiments.

The research was supported by the Department of Energy’s Office of Science and the National Nuclear Security Administration, the National Science Foundation, Rutherford Appleton Laboratory, Empa and the Swiss National Science Foundation, the University of Zurich, and the National Centre for Research and Development in Warsaw, Poland. oClimax neutron data software, part of the ICEMAN project funded by the Laboratory Directed Research and Development program at ORNL, was used to analyze and interpret the inelastic neutron scattering spectra.