CNRS and ESS Advance a New Standard for Linac Design 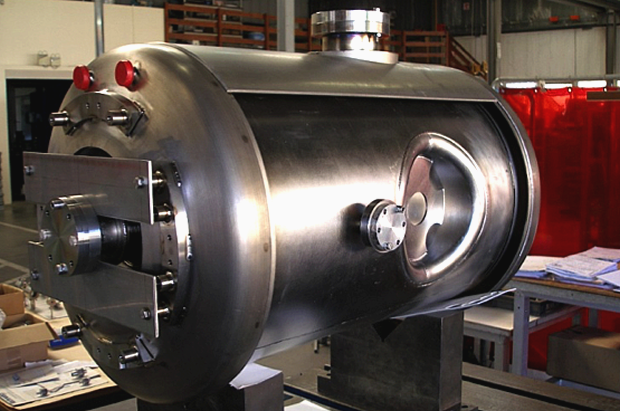 Spoke Cavity Prototypes Exceed Expectations.
An important test result was achieved this summer at the accelerator lab of the French Institute of Nuclear Physics, IPN-Orsay. The finding is important to linac development worldwide, but of particular importance to the ESS Accelerator currently under civil construction in Sweden and in technical development across Europe.

ORSAY and LUND—The European Spallation Source (ESS) Accelerator will be a 5-megawatt, superconducting, linear proton accelerator (linac). It is the most advanced linac being built today, and it will be the most powerful ever built by a factor of five. It will also be the first linac to use spoke cavity technology to accelerate protons.

IPN-Orsay’s (IPNO) Accelerator Division is developing and building this technology as part of its responsibility to deliver Accelerator Work Package 4 (WP04), an in-kind contribution to ESS of nearly €20 million. IPNO is a division of CNRS, the French National Centre for Scientific Research, which has long been a key partner in the ESS Accelerator project. 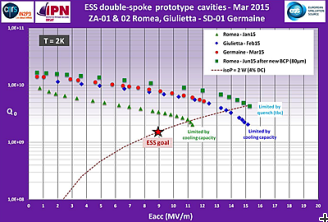 The French lab will design, produce and deliver the Accelerator’s 13 spoke cavity cryomodules. These cryomodules, each of which will contain two spoke cavities, two power couplers, and be fitted with a custom designed ESS Cold Tuning System, will run end-to-end, constituting around 56 meters of the roughly 600-meter-long ESS Linac. The spoke cryomodules are the first critical step in the superconducting stage of the Accelerator.

The test performed in June, in conjunction with similar tests performed in January, February and March of this year, has provided the final validation that the spoke cavity prototypes designed by IPN-Orsay and manufactured by two different vendors—Zanon in Italy and SDMS in France—are ready to move into production. More than this, the June test confirmed that the lab’s new chemical surface treatment of the niobium cavity’s metallic surface allows ESS ever larger margins on measures of both quality and acceleration speed—an added assurance that the technology will perform as required following production, assembly, and installation.

“January was the first peak of excitement when we reached the nominal performance on the first prototype. Not only the nominal performance, but plus something like 20 percent margin,” explains Sébastien Bousson, who as Director of the Accelerator Division at IPN-Orsay is responsible for the CNRS contribution to the ESS Accelerator, and serves as the leader of WP04. “What is the most obvious thing to report on is that it reached an acceleration gradient of 11.4 megavolts per meter (MV/m). Between January and now we have tested the two other prototypes, also with different preparation steps. All three reached nominal performance, but the interesting thing is that all three reach much better than that. And on the last one, we reached 15 MV/m. 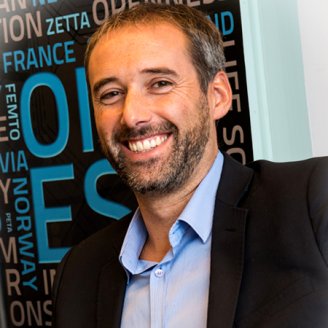 “So this is a very very good achievement. It proves the design is adapted to the 9 MV/m requirement, which is already an ambitious value to reach. It was not obvious we would reach it on this type of structure.”

A First for Linac Design

The use of spoke cavity technology to accelerate protons has been achieved in laboratories, but the ESS Linac will be the first to integrate it on a large scale. What it means for ESS is that the Accelerator will enter into its superconducting stage at a lower energy than any existing linac, with 97% of the proton beam acceleration speed achieved in a superconducting environment.

“The boost in performance and efficiency that we get with the superconducting spoke cavities gives the ESS Linac a great deal of flexibility,” says Mats Lindroos, Head of the ESS Accelerator Division. “It’s an exciting development that the prototype cavities have been fully validated in the lab, providing us with exceptional margins as we move toward installation.” 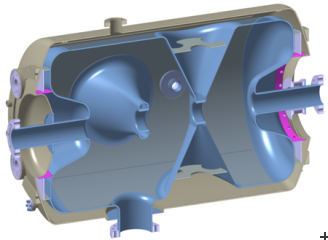 A spoke cavity is a metal enclosure—like a barrel, though a barrel of a very particular shape—into which a powerful radio frequency (RF) electromagnetic wave is introduced at a very precise frequency of 352.21 MHz. The shape, temperature, and material composition of the cavity, along with other factors, ensure that the RF waves will propel the protons from one cavity to the next at ever increasing speeds.

The value of the spoke cavity is twofold: its stable operation under stressful conditions and its ability to reach a very high accelerating gradient.

“Now, why the spoke?” asks Bousson. “The spoke is very interesting just because the structure itself is mechanically very stiff. It means the cavity is not affected by a lot of things that can cause troubles in its operation—vibrations, the variation of the pressure of the helium bath—that can affect the behaviour of the cavity and the capability to accelerate. The second advantage is that it can reach a very high accelerating gradient that with standard cavity geometries you cannot reach.” 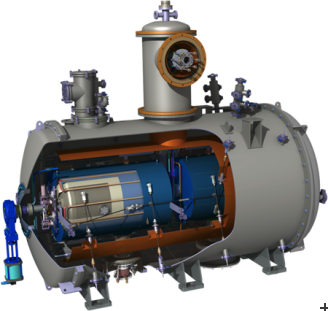 At ESS, two niobium spoke cavities will be installed within a third metal enclosure, a stainless steel vacuum vessel. Helium from the ESS cryoplant is piped into each cavity, cooling the spoke cavities to 2 Kelvin (-271 C), a temperature that ensures their superconducting properties. This means the RF power coming off the grid and transferred into the cavities—some 400 KW of electromagnetic energy—acts on the proton beam at an efficiency close to 100%, and is not absorbed by the metal cavity. The entire structure, just under 3 meters long and 1.3 meters in diameter, is called the spoke cryomodule.

The lab will also provide the complex power couplers that feed the RF power into the cavity, as well as the Cold Tuning System, a set of motorised and actuated devices that physically adjust the shape of the cavity to ensure that it vibrates in tune—at the exact same frequency—with the RF power.

“The cavity, its power coupler, and its tuning system will be assembled using dedicated labs, clean rooms, tooling, and expert manpower,” explains ESS Senior Engineering Scientist and Deputy Work Package Leader for WP04 Christine Darve. “Each assembly step requires a specific attention in order not to contaminate the cavity, which would limit its performance. Such issues during series production would prevent the proper operation of the ESS Accelerator. So you see why we can’t do this on our own, we need the infrastructure and the people who already have the expertise. It would take ESS several years to develop this competence in-house.” 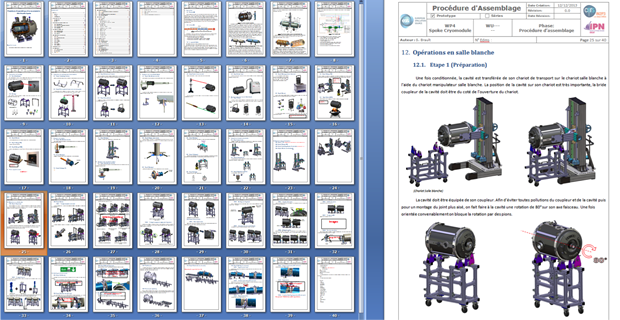 Spoke cavity technology originated in the early 1980s with a French researcher at Jefferson Lab in Richmond, Virginia. Though promising, the performance of this initial design was rather poor, and not sufficient for use in an accelerator. Seeing the opportunity to improve linac technology by improving the performance of these cavities, CNRS established a dedicated R&D program in the early 2000s based at IPN-Orsay. Over several years the IPNO Accelerator Division made important advances on the novel technology. Spoke cavity design matured finally to the point where it could be included in the preliminary designs of the ESS Accelerator many years ago. In 2015, the first linac spoke cavities will finally go into production.

“Before Lund was chosen as a site for ESS we were ‘already there’, working on how the ESS Accelerator could look at the time,” says Bousson, under whose supervision the spoke cryomodule section of the 2013 ESS Technical Design Report was written. “But then the real big start was in late 2010 when there was a contract signed between the French and Swedish research ministries setting the participation for both CNRS and CEA [the French national atomic energy agency]. And we will deliver the last cryomodule in January 2019 and participate in the installation and commissioning. So we will complete WP04 before the end of 2019.”

In addition to CNRS’s contribution, CEA-Saclay is designing and currently prototyping the so-called elliptical cavities, the larger and more complex, if more conventional, superconducting part of the ESS Linac. These cavities comprise the bulk of the Linac, and will take the proton beam from the spoke cavities and accelerate it nearly to the speed of light. Together the two French national organisations are expected to provide 90% of the €147 million French contribution to ESS through their in-kind contributions to the Accelerator project.

One measure of the importance of the project in France is the recent awarding of Bousson with CNRS’s highest honour for technical achievement, the 2015 Médaille de Cristal du CNRS, based in part on his work with ESS. Bousson will receive the medal at a ceremony today in Orsay, with ESS’s Lindroos in attendance.

“The collaboration with IPNO on the development of the ESS linac has been critical, and we have relied heavily on their unique expertise and experience,” commented Lindroos. “It is particularly significant that they have taken the lead in building spoke cavity technology into a linac for the first time.”

The next step for IPN-Orsay—where 30 scientists and engineers, contributing the full-time equivalent of 15 employees, are working on the ESS Accelerator—is to integrate the RF power coupler with the cavity and confirm that they will function as a unit at high RF power. Following that, the assembly will be tested in the specially designed HNOSS cryostat at the FREIA Laboratory at Uppsala University in Sweden, a facility developed largely for this purpose.

The spoke cryomodule prototyping and testing is expected to be concluded by May of next year, after which full production of the components can begin. Then all eyes will turn to the complex processes of assembly, installation and commissioning inside the Accelerator tunnel in Lund. 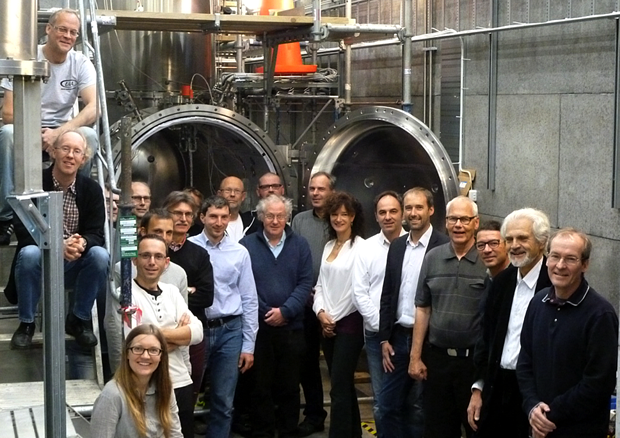