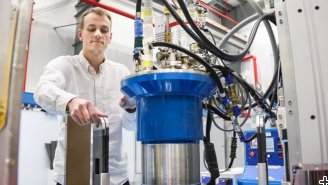 Thermoelectric devices are highly versatile, with the ability to convert heat into electricity, and electricity into heat. They are small, lightweight, and extremely durable because they have no moving parts, which is why they have been used to power NASA spacecraft on long-term missions, including the Voyager space probes launched in 1977.

Because applying an electrical current to a thermoelectric causes charged particles to diffuse from the material’s hot side to their cold side, they are widely used in cooling applications to pull heat out of systems, such as in heat pumps, fiber-optic devices, and car seats—and to control the temperature of battery packs. The process is also reversible and can effectively reclaim “waste heat” to generate useful electricity from hot surfaces, such as a vehicle’s tail pipe.

Despite their versatility and reliability, using thermoelectric technology in many applications remains a challenge, because of their relatively high cost and inefficiency compared with conventional power and heating or cooling systems. For maximum efficiency, thermoelectrics need to be both good conductors of electricity and poor conductors of heat—properties rarely found in the same material.

Engineers from Duke University are using cold (lower- energy) neutron scattering techniques at Oak Ridge National Laboratory (ORNL) to study the vibrational motions of atoms, called “phonons,” which is how heat propagates through thermoelectric materials. By understanding how phonons move and are scattered within thermoelectrics, the scientists hope to eventually control phonon and electron transport to improve electrical conductivity while minimizing heat flow.

“We are using neutrons to study thermoelectric materials, because we can tune their energies to match the lower energy of the phonons, which provides a higher resolution,” said Tyson Lanigan-Atkins, a Ph.D. student at Duke, in a group working under Olivier Delaire, associate professor of mechanical engineering and materials science. “Neutrons also enable us to conduct research in more complex sample environments, like the custom encapsulation we are using in a high-temperature environment.”

Among the thermoelectric materials used in the experiments was a single crystal of lead selenide, which was one of the first alloys investigated and commercialized for thermoelectric generators. The scientists were interested in the structural phase transition of the material at high temperatures, due to the unique coupling between the electronic and lattice vibrations in the system, and the influence this transition has on thermal conductivity.

While conducting their research at the cold neutron triple-axis spectrometer (CTAX) neutron beamline at ORNL’s High Flux Isotope Reactor (HFIR), the scientists needed to align large crystals to within a degree or two of each other. They encountered several engineering challenges in designing their experiment, including developing a sample holder to correctly position the encapsulated crystals within the neutron beam.

“The material becomes very unstable—essentially it begins to evaporate—under vacuum conditions and in common gas environments, which is typically how we perform high-temperature experiments,” said Jennifer Niedziela, a vibrational spectroscopist in ORNL’s Nuclear Science and Engineering directorate and former postdoctoral researcher in Delaire’s group. “Anticipating these issues, we encased the samples inside quartz capsules to maintain a controlled atmosphere around the sample, which enabled us to study the phonon dynamics. This highlights another advantage of neutron scattering in that we can put a lot of material in the path of the neutron beam, like quartz, wool, and wires, and still see the signals that interest us.”

The design of the sample holder went through several iterations to ensure the researchers could heat the sample safely. They consulted with experts at the ORNL glass shop, which made the quartz capsule, and the sample environment laboratory, as well as experts in high-temperature materials, to ensure they could design a holder that would meet the researchers’ objectives. Each holder had to be designed to retain the crystal in a fixed orientation and fit within a relatively small area in the high-temperature sample environment. If the sample were to move, they risked shorting the furnace and causing it to switch off.

Previous efforts to resolve acoustic phonon linewidths below 1.0 milli-electron volt (meV) were not successful due to the resolution limits of the neutron instruments employed. However, the cold neutrons delivered by the CTAX beamline are well-suited for high-resolution measurement of lattice dynamics in crystalline solids that have a high signal-to-noise ratio, such as thermoelectric materials. “Using the triple-axis spectrometer at CTAX, we obtained excellent data on the linewidth of acoustic phonons below 1.0 meV in a high-temperature regime,” said Niedziela.

Provided by: US Department of Energy search