Crystalline structure of ice clouds and their formation clarified 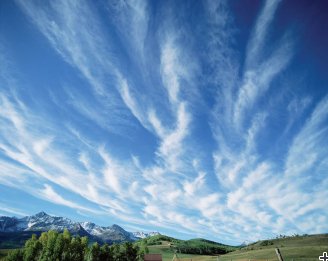 Ice clouds Ice clouds of the lower stratosphere in a height of 15-20 km can be seen from the ground only rarely and only far in the north. © Tobias Zolles / TU Wien

Anyone who has ever looked out of the window during an intercontinental flight has probably already seen it: cirri, the ice clouds in the upper troposphere (8-12 km high) look like rattled cotton. But also in the lower stratosphere (15-20 km altitude) there are ice clouds, so-called polar stratospheric clouds (abbr. PSCs). These are seen very rarely from the ground, usually only in Scandinavia during the sunrise or sunset, since the upper layers of the atmosphere are already or still illuminated because of the earth curvature, while the soil is in the dark. Ice clouds play an important role in various atmospheric processes, e.g. in the radiation balance of our planet, with a strong influence on the climate, or in the ozone depletion at the polar caps.

For a long time, the formation mechanisms of ice clouds were unclear. Finally, it could be shown that they consist primarily of water ice and nitric acid trihydrate (NAT): the latter can again assume two different crystalline structures (alpha- and beta-NAT). However, the meteorologists could not prove this experimentally because the structure of these crystals could not be clarified in the atmosphere. The research group of Prof. Hinrich Grothe at the Institute of Materials Chemistry of the Technical University of Vienna believes that the alpha form of the hydrate is the crucial component in the formation of these ice clouds and focused on it. This form, however, is only temporarily stable (metastable) and has therefore not yet been bred as a single crystal. They succeeded, however, in producing a pure, polycrystalline powder, and testing this with the powder diffractometer SPODI . “To investigate this was quite difficult”, as Markus Hölzel, responsible scientist for SPODI, explains: “The samples had to be never warmer than -173 ºC even during installation at the instrument.” Finally, the research team was the first to fully understand the structure of this component of ice clouds.

However, since the beta-hydrate is always present in the atmosphere at the end of the ice cloud formation process, the phase transition between the two modifications had to be investigated and understood. For this reason, the Viennese group compared their neutron results of the alpha form with the beta form. “We found, that the beta form has a similar volume but a more symmetric structure than the alpha form. This is at the same time the first proof of an independent existence of this alpha form, “summarizes PhD student Fabian Weiss.

The scientists had no peace that they never succeeded in breeding perfect, water-free crystals of the alpha form. They continued experimenting with nitric acid vapor and ice crystals and tried to create atmospheric conditions. So, the group made another important observation: As long as enough ice is available, the alpha form is always produced first, never the beta variant. This metastable form exists for some time, if the alpha crystals are in contact with ice and only slowly changes into the beta form. “We can now state that the alpha form can only occur in the narrow temperature range between minus 85 °C and minus 73 °C. It has a high affinity to water ice, which plays a crucial role when it comes to the formation of ice clouds in the lower stratospheric or troposphere” Weiss says, who is also the first author of this first ice cloud experiment with neutrons.

The next step must now be the detection of alpha-NAT in the atmosphere. This is not an easy task, but can be achieved with the help of satellite measurements, because the scientists have also measured and assigned the vibrational spectra of both modifications in the laboratory. To this end, they have worked together with colleagues at the Science & Technology Facilities Council (ISIS) in the UK, the Instituto de Estructura de la Materia (IEM-CSIC) in Spain and the Paul Scherrer Institute (PSI) in Switzerland. These spectroscopic data in the range of the deformation vibrations and the lattice vibrations may possibly allow differentiation of the crystal modifications in the atmosphere.