Deep look into teeth with neutrons

Fans of crime stories know: If the dentition of an unknown victim can be compared with a tooth scheme, the identity is soon clarified with this information. Similarly, the paleontologist study teeth as they contain a lot of essential biological information, representing a kind of “black box” of the life of a past individual. However, these information are not so easy to extract. 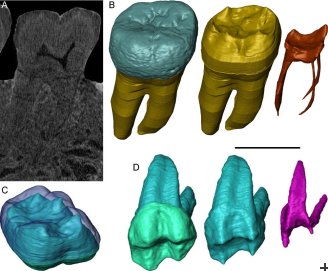 Teeth neutron microtomographyrecord The neutron microtomographyrecord (A) of the Java man enabled to extract the 3D internal structure of the molars (B). Similarly, the 3D internal signature of the fossil orangutan molar from Java (C) and of the South African fossil long-tailed monkey teeth (D) were brought out and virtually rendered with accuracy.

The distinction between tooth enamel and dentine, which forms the two main mineralized tissues of a tooth, is particularly difficult. Both are made of dense minerals, and in the case of fossil teeth it is sometimes difficult to distinguish them with X-rays. Indeed, due to chemical changes during the fossilization process, contrasts between dental tissues can become hardly noticeable, even sometimes with synchrotron imaging.

Paleobiologists often struggle with further difficulties: the teeth can be deeply embedded in hard rocks that are not possible to remove without damaging the specimen. And very often in this case, X-rays cannot penetrate the rock, preventing the study of the hidden fossils inside. Paleobiologists generally want to establish a taxonomic classification of their fossil findings, i.e., determining to which species they belong. They therefore strive for a “virtual paleohistology” instrument that can show structures on a micrometer scale or even below without damaging the specimens. Paleoanthropologist Clément Zanolli from the University of Toulouse and his colleagues looked for the ultimate 3D method that makes the different mineralized tissues of a tooth and its surrounding materials visible, even in cases when X-rays failed to unveil the internal structure. 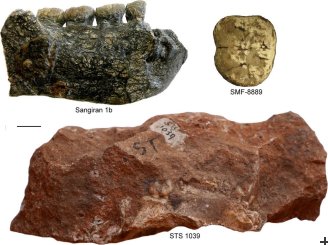 Teeth On the upper left is the lower jaw of the early man from Java, on the upper right the fossil orangutan tooth is to be seen and the rock below contains the upper jaw of the long-tailed monkey. Scale: 1cm. (Photo: C. Zanolli)

Thus Zanolli came up with the idea of using a cold neutron beam, adapted sensitive detectors and the quite new method of three-dimensional high-resolution recently developed at the ANTARES facility of the Technical University of Munich. This led him to the FRM II lab with three different samples in his luggage: a highly mineralized piece of an early human’s jaw from Java, a fossil orangutan tooth from Indonesia and the upper jaw of a long-tailed monkey from a cave in South Africa embedded into a massive piece of rock. With X-ray radiation nothing worth mentioning in these pieces could be made visible. Conversely, neutrons revealed something never seen before: a clear distinction between dentine and enamel, yet between bone and dentine, and even between biological mineralized tissues and rock. Zanolli is particularly enthusiastic: “This is not only the first time that we have applied this method to fossil primate teeth, but also– with the help of Burkhard Schillinger of the FRM II – that we could extract three-dimensional images of the individual elements of the teeth’s internal structure. With these three samples, we were able to prove that neutrons are an effective and safe way to image fossils and that this innovative method is relevant to extract the paleobiological signature hidden into their structure.

An advantage for such valuable artefacts is that they are not destroyed with this method. However, the presence of glue or resin that was sometimes deposited on the fossils to protect them in the past, generally containing a large amount of hydrogen and thus heavily absorbing neutrons, can produce artifacts on the images. A possible disadvantage could be that the samples became activated for a long period by surrounding heavy elements such as cobalt or europium with long half-life. The scientists have therefore also studied soil samples from the environment and have found that these elements occur very rarely, if at all, and are therefore not a problem. Clément Zanolli is so convinced of the quality of these first results that he has recently arrived with 60 more fossil teeth to examine these at FRM II. These specimens are between 0.9 and 1.4 million years old and the aim of the study is to determine which ones are definitely humans and which ones belong to an extinct relative species of the orangutans.