Structural chemist and chemical crystallographer Dr Alison Edwards has contributed to the characterisation of two large, complex silver nanoclusters of 136 and 374 atoms as part of an international collaboration led by researchers from Xiamen University in China. 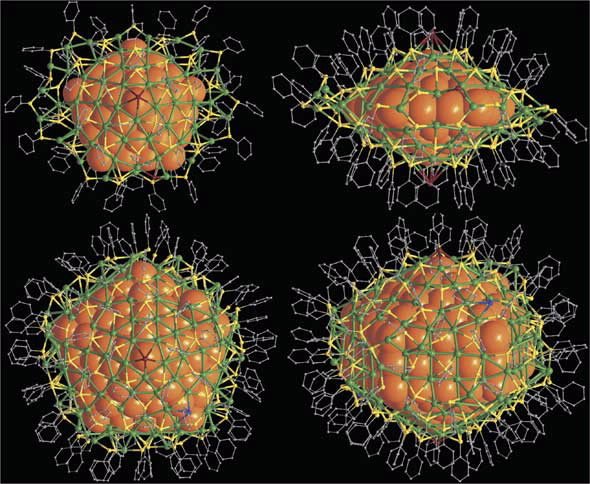 Silver nanoparticles have properties that are of particular interest for electronics and optics and could have many potential industrial applications.

In research published in Nature Communications, the Chinese collaborators led by Xiamen University Professor of Chemistry, Nanfeng Zheng, synthesised the new molecules, took physical measurements, carried out the X-ray diffraction and electron microscopy and solved and refined models for the crystal structures.

Dr Edwards, who works within the Australian Centre for Neutron Scattering at ANSTO and Dr Birger Dittrich from the University of Düsseldorf in Germany, carried out the advanced crystallographic analyses from the X ray diffraction data to derive the reported structure for each compound.

The Xiamen group was building on their highly accomplished synthesis and characterisation of nanoparticles containing 44 metals, either all silver, or a core of 12 gold (or gold and silver) atoms surrounded by 32 silvers, which appeared in Nature Communications in 2013.

The authors believe it is the first time that the atomic structure of such large metal nanoparticles with a core beyond 2 nanometres has been characterised with X-ray crystallography.

Both molecules have a remarkable five-fold core of 2-3 nanometres, the smaller core is decahedral, while the larger is elongated along the molecular 5-fold axis giving a series of convex polyhedral shells around a central silver atom. The outer shell that surrounds the nested structures is made of a complex coating of silver plus sulfur atoms.

A more detailed look at the structure

“The silver-136 compound has a core of 57 silver atoms in the shape of a pentagonal bi-pyramid surrounded by two 30 silver-atom dome-like structures which are then linked together,” said Edwards.

“Instead of having tetrahedra that join together to make a decahedron, you have five wedge-shaped units which are like a tetrahedron that has been stretched out.” 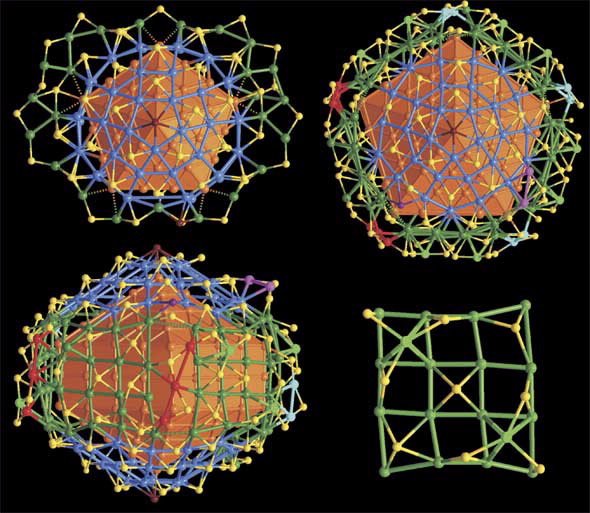 “Both nanoparticles have an outer coat of sulfur containing organo-thiolate ligands which confer the solubility and facilitate crystallisation,” said Edwards.

The two 30 silver atom domes of each structure are linked by silver thiolate bands —for the silver-136 nanoparticle it is a flattish ribbon like structure while around the larger nanoparticle the linker band is effectively a pentagonal cylinder.

“In determining crystal structures, you build a model to fit the observed data and what fits the data measured from the crystals is a chloride apex for silver-136 and bromide in the silver-374,” said Edwards.

Not content with relying on X-ray diffraction for this chemical identification, the synthesis of the 136 silver atom complex was repeated using chloride (not bromide as in the original synthesis) and undertook careful mass spectroscopy studies to verify these formulations.

“It was really very exacting, because there are so many atoms, you can find yourself in a local minimum that looks reasonable but it requires a lot of iteration and criticism before you arrive at what you finally present as the probable answer,” said Edwards.

“Although the larger molecule approaches three times the size of the smaller, due to higher symmetry the larger one is not all that much bigger crystallographically,” said Edwards.

The authors point out that planned syntheses of nanoparticles with targeted properties requires the understanding that detailed molecular structures provide.

Changes in the outer ligands (thiolates) provide scope to vary both the nature of the core and the interfacial properties, opening a range of chemical possibilities through which nanoparticle structures and optical and electronic properties could potentially be modified.

Edwards praised the ground-breaking work being done by Prof Zheng and his team at Xiamen University.