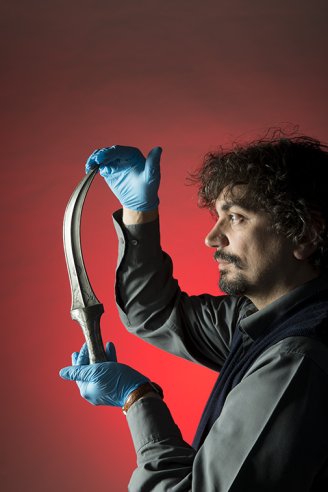 Hidden ‘Damascus’ patterns in the steel used to make ancient Indo-Persian swords and daggers are being uncovered by collaborators from London’s Wallace Collection and CNR, Italy, during neutron diffraction experiments at ISIS. This work gives insight into the quality of the blades as well as helping curators identify ‘Damascus steel’.

The results will be fundamental in helping to build a comprehensive catalogue of nearly 1,000 items in the Oriental Armoury collection at the Wallace, by identifying the materials used to make the objects. A long-standing aim has been to catalogue the entire collection since the last brief attempt in 1914.

In as early as the 9th century, an expensive and unusual kind of steel, known as crucible steel, was being produced in many areas of the Indian subcontinent, Iran and Central Asia. It had a very high carbon content (1.2% – 1.8%) which was unequalled in Europe until the Industrial Revolution in the 18th century.

Later crucible steel often had a tell-tale ‘watered-silk’ pattern, misleadingly known as ‘Damascus’, which historically was a status symbol because it indicated a high quality blade. These patterns were due to large crystals of iron carbide (cementite) arranged in rows by careful forging.

Damascus steel was so valuable that some blade smiths tried to counterfeit its appearance through ‘pattern welding’ or etching a fake pattern on cheaper metal. 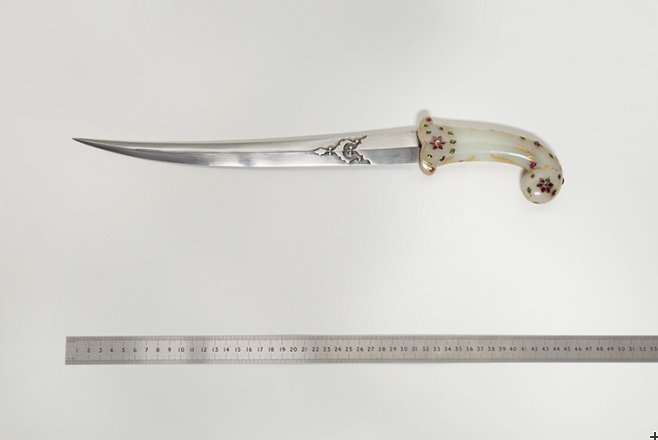 Sword An Indo-Persian sword with jewels set in the hilt, which forms part of the Oriental Armoury at the Wallace Collection, London. Credit: STFC

The Wallace Collection in London has many Indo-Persian swords which were probably made of crucible steel. However, many of the blades do not have a visible pattern, probably due to over-polishing by 19th century dealers, and so the type of steel used remains unknown.

Unlike armour which is relatively easy to study microscopically due to its plates having cut edges which can be polished, sword blades have to be sectioned, which is unacceptable for museum objects. Therefore the swords must be analysed non-destructively, and neutron diffraction offers a perfect solution. 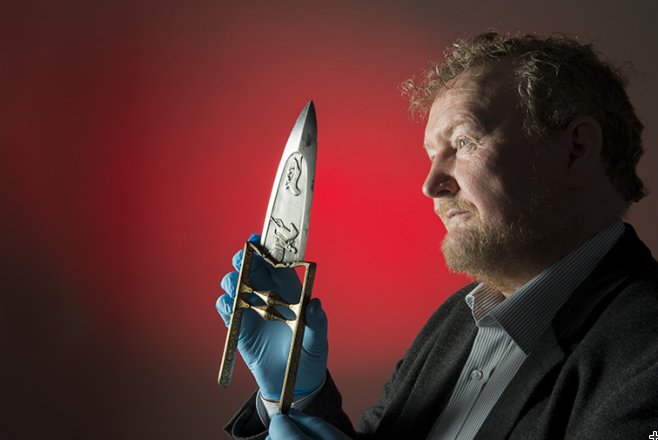 Those swords with a high carbon content can be identified as crucible steel. In addition, the distribution of cementite indicates which blades may have a ‘Damascus’ pattern even though it may be hidden.

Neutron data can thus be used to tell curators whether a blade is a cheap, low-carbon, steel, a high-carbon crucible steel, and even whether it is a Damascus steel whose characteristic pattern has been hidden. These results will then enable museum conservators to restore the pattern.

In future studies, comparisons between the analysis of replicas, of known composition and fabrication made by an American blade smith who is attempting to produce watered crucible steel with ancient techniques, and the analysis of artefacts from the Wallace Collection will enable researchers to deduce something about the methods used to make Damascus blades.

This will all help to build a database of knowledge about Oriental steel, which will eventually help curators to identify the origins of their objects.

This work on INES is a result of a recently celebrated 30-year collaboration between ISIS and CNR. Dr Francesco Grazzi, CNR worked on the development of INES, an instrument which is crucial to the Italian community. The instrument was developed to accommodate ancient objects, in terms of the space, alignment, elemental analysis and the support frame available, as well as the high resolution spectra it is able to produce. 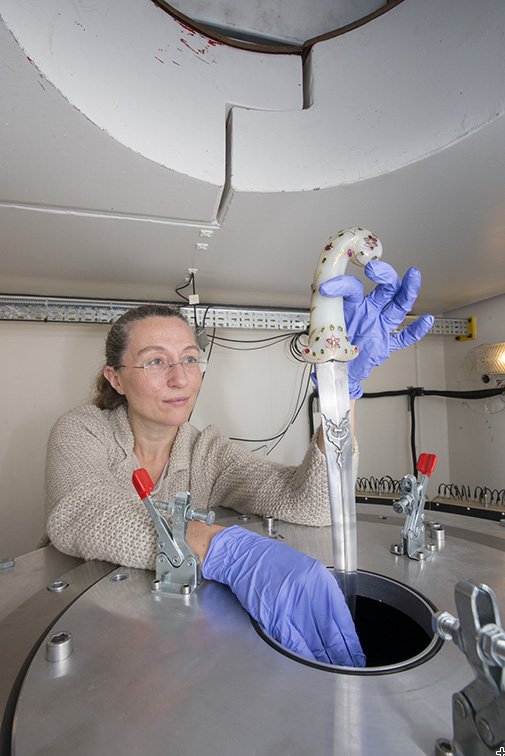 “The idea was to give a different purpose to a powder diffractometer for the international community,” said Antonella Scherillo, ISIS instrument scientist for INES.

“INES and the STFC-CNR collaboration, along with other collaborations with international facilities are crucial for the Italian scientific community as there are no neutron sources in Italy.”