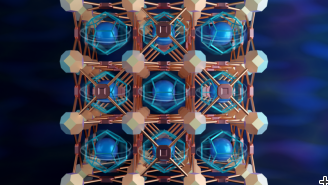 Methane, the primary component of natural gas, is one of the most abundant organic compounds on Earth. Like other fossil fuels, it can be captured, stored, and used for heating buildings, powering natural gas vehicles, cooking food, and in many industrial processes.

However, natural gas can be difficult, expensive, and risky to transport and store. Conventional distribution and storage methods involve long and expensive pipeline systems, or compressing the gas in reinforced portable tanks at around 3,000 pounds per square inch (psi)—roughly 100 times higher than the pressure in a car tire—or condensing the gas into a liquid in cryogenic containers, which is energy intensive as this requires maintaining temperatures as cold as -260 degrees Fahrenheit.

Developing new materials to store methane onboard vehicles at much lower pressures and at higher temperatures could help scientists and engineers reach Department of Energy (DOE) targets to fuel the next generation of clean energy automobiles.

Now, scientists from Spain, Morocco, Saudi Arabia, and the DOE’s Oak Ridge National Laboratory (ORNL) have used neutron scattering to identify and characterize a material that could store and release methane more safely and cost effectively in an ice-like crystalline form at moderate temperatures and pressures. The results of the research were published in the Journal of the American Chemical Society.

The material is a specially designed porous metal-organic framework (MOF) material, referred to as Cr-soc-MOF-1, with the ability to adsorb nearly twice its weight in water. The researchers found that this material promotes the rapid growth of methane hydrates (a CH4 methane molecule enclosed by interlocking water molecules) at a relatively low pressure of around 400 psi and at a temperature as high as 37 degrees Fahrenheit. Conventional methods of storing methane in similar materials typically require pressures as high as 1,400 psi. The study also shows the entrapped methane can be captured and released within a narrow pressure range, which could enable methane storage systems to be less complicated and more economical.

The scientists demonstrated the amount of the solid hydrated methane adsorbed at the lower pressure was approximately 50 percent greater than for dry methane gas at 1,400 psi. The Cr-soc-MOF-1 can hold such large quantities of methane because it is so extremely porous that just one gram of the material (about the weight of one plain M&M candy) if stretched out would have enough surface area to cover nearly an entire football field.

“The amount of methane this MOF can store at a relatively low psi—less than one-quarter of that produced by light-duty pressure washers—is really remarkable,” said Timmy Ramirez-Cuesta, team lead for ORNL’s chemical spectroscopy team. “By lowering the temperature of the MOF even further, to about 20 degrees Fahrenheit, the methane remains stored in the MOF at even lower pressures.”

Ramirez-Cuesta added that the adsorption process can be reversed to release the methane simply by raising the temperature a few degrees or lowering the pressure. “The narrow pressure range between methane hydrate formation inside the MOF and its release indicates that future methane storage devices could operate under less-demanding pressure swings, which would permit less-expensive containment systems.”

Lighter, more reliable and affordable storage systems could facilitate using natural gas as a fuel in more vehicles, where weight, safety, and cost considerations are paramount. Storing the fuel onboard a vehicle in the crystalline solid form of a methane hydrate could also address industry and consumer concerns about the flammability of methane in its gaseous and liquid forms.

“We employed neutron scattering on the VISION vibrational spectrometer instrument at ORNL’s Spallation Neutron Source to obtain the first evidence of methane hydrates forming in the pores of an MOF,” said Joaquin Silvestre-Albero, full professor at the University of Alicante, Spain. “The Cr-soc-MOF-1 material appears to have an optimal cavity, or “cage,” size to isolate the methane hydrate nanocrystals at one crystal per cavity.”

To promote the formation of the ice-like methane hydrate crystals, the MOF was first preloaded with water and cooled, then exposed to the methane. The material is loaded under pressure to help drive the methane into the interior cavities of the material and help hold the methane molecules inside the MOF pores. A sample of the MOF was then subjected to neutron spectroscopy, a method of measuring the atomic motion of atoms.

“The spectroscopic signatures of the rotating molecules trapped inside the pores were perfectly captured by the neutron ‘camera’ on VISION, which is a textbook example of how neutron scattering can be a valuable diagnostic tool,” said Yongqiang “YQ” Cheng, ORNL neutron scattering scientist. “Only neutron spectroscopy could have provided such direct experimental evidence of the methane molecules trapped and rotating inside their MOF cages.”

Identifying a cost-effective methane storage method could have broader applications for renewable energy, such as capturing methane produced by farm animals, landfills, and oil extraction—much of which is currently released into the atmosphere, where it is a potent greenhouse gas.