Scientists from EPFL, PSI, and Budapest have discovered skyrmions in the very material class they were originally predicted. These strange quasiparticles can be controlled with electrical fields, which can be used in futuristic memory storage.

Skyrmions are tiny vortexes that appear on certain materials. Originally just an abstract theoretical concept, these “quasiparticles” raised great interest when it was discovered that certain magnetic materials can host “magnetic skyrmions”: nanometer-sized twirls in the magnetic texture. The excitement is largely due to the potential of magnetic skyrmion materials for storing information in future memory and logical devices. Now, scientists from EPFL, the Paul Scherrer Institute and Budapest University have discovered skyrmions in a polar magnetic semiconductor, which is one of the materials originally predicted to host skyrmions. The discovery is reported in Nature Materials. 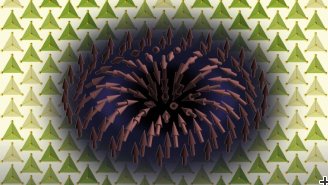 From theory to reality

Up until now, magnetic skyrmions had only been detected in a very limited class of materials, all of which shared the same crystal structure, meaning that their atoms were arranged in a similar fashion. Strangely enough, skyrmions have never been found in the material class where they were first theorized to exist: polar magnetic materials.

The group of Henrik M. Rønnow, in collaboration with Istvan Kezmarki from Budapest University, has now discovered skyrmions in gallium-vanadium sulphide, which is a polar magnetic semiconductor. But more importantly, it belongs to the class of materials originally predicted to exhibit skyrmions.

Thus far, scientists have only been able to detect a single type of skyrmions, which form a vortex rotating around their center, like a tiny tornado. These are called “Bloch-type” skyrmions. The skyrmions that Rønnow and his colleagues identified belong to a class that so far existed only in theory: the Neel-type skyrmions, where the periphery of the vortex rotates radially towards the center.

Rønnow’s lab worked with Jonathan White at the Paul Scherrer Institut (PSI), exploiting a powerful technique called Small-Angle Neutron Scattering, which can explore the structure of materials at an intermediate (“mesoscopic”) scale. The team has used this approach in the past in combination with electrical fields, making them the first to demonstrate control of skyrmions in copper selenate with electrical fields. Earlier this year they worked with RIKEN and the University of Tokyo to invent a cobalt-zinc-manganese alloy that could host skyrmions at room temperature – an important pre-requisite for technological applications. In the present study, Rønnow and White teamed up with Kezmarki’s lab, and the collaboration was able to detect what they call “smoking-gun evidence” of skyrmions in gallium-vanadium sulphide.

Magnetic skyrmions could be used as data bits in the future. In such systems, the state of the bit (e.g. 1 or 0) is encoded by the presence or absence of a magnetic skyrmion. “Polar materials like the one in this study can be controlled by electric fields,” explains Henrik Rønnow. “Therefore, we could expect that writing and deleting skyrmions will be easier in such materials. Controlling magnetic storage with electric fields rather than currents has the fundamental advantage that, while electrical currents inevitably lead to power loss, electrical fields can be dissipation-less.”

This study represents a collaboration of EPFL’s Laboratory of Quantum Magnetism with the Budapest University of Technology and Economics, the University of Augsburg, the Paul Scherrer Institute, the Institut Laue-Langevin, Aoyama Gakuin University, the Japan Science and Technology Agency, Kyoto University, and the Academy of Sciences of Moldova. The work was funded by the Hungarian Research Funds, the European Research Council (Project CONQUEST), the Swiss National Science Foundation, The Deutsche Forschungsgemeinschaft, the Transregional Research Collaboration TRR80, and the Japan Society for the Promotion of Science KAKENHI (Japan’s Ministry of Education, Culture, Sports, Science and Technology).