LUND — A research group from the University of Warwick in the UK, Institut Laue-Langevin (ILL) in France, and the European Spallation Source (ESS) recently reported the discovery of dispersionless spin waves on 10 localised sites in the synthetic crystalline material gadolinium gallium garnet (Gd3Ga5O12). The research has been published in the June 2015 issue of the journal Physical Review Letters.

Revealed through the application of high magnetic fields, the spin waves occur at the lowest-lying excitations, or energy levels, and possess a field-dependent chemical potential that enables one to probe the phases of magnetic ordering through established spin wave theory. The neutron Time-of-Flight measurements were made on the direct geometry spectrometer IN5 at ILL.

The experiment demonstrates that the low-lying dispersionless excitations correspond precisely to spin waves localised on a 10-ion site. Furthermore, the high magnetic field spectrum could be understood by including dipolar interactions that cause the GGG spin to slightly cant, or tilt, away from the applied field. The observations have allowed the researchers to understand longstanding discrepancies between neutron diffraction and inelastic scattering in a unified manner. 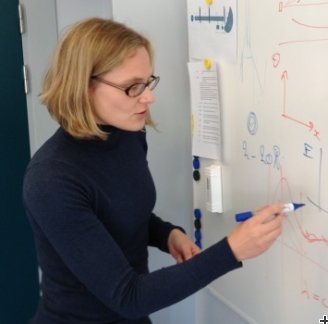 “The work presented has delved further into the richness of phenomena realised in nature,” says ESS Instrument Scientist for Direct Geometry Spectroscopy Pascale Deen, who was part of the research team.

Using neutron diffraction and inelastic scattering techniques on a topologically complex material—a hyperkagome lattice—the researchers detected a magnetic structure that is arranged onto a 10-ion loop more reminiscent of a large biological molecule.

“This is particularly interesting since it sheds light on a novel state of matter, magnetic frustration, in which the dynamic behaviours confound the microscopic theory of spin interactions that we currently understand. We conclusively show how relatively well-understood exchange interactions develop complex emergent behaviour,” says Deen.