Researchers at the Paul Scherrer Institute PSI have found a way of looking inside the iron core of transformers. Transformers are indispensable in regulating electricity both in industry and in domestic households. The better their iron cores are magnetized, the less energy they lose and the more efficiently they work. The groundbreaking investigatory method of neutron grating interferometry developed at the PSI has opened up the possibility of observing magnetic domains at work as they establish magnetic fields inside the iron core. This is a significant step towards understanding how transformers work today and in the development of more efficient transformers in the future—not least because the EU has set new energy-efficiency targets in this field, which Switzerland has also agreed to. Researchers reported on their results in two studies published in the latest edition of the specialist journal Physical Review Applied. 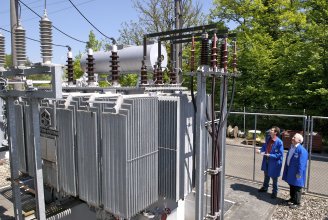 Nonetheless, there remains room for improvement in this field. Two new studies by a team of neutron-research scientists led by Christian Grünzweig at the PSI have explored and applied a state of the art method which shows tiny magnetic structures in the interior of a transformer at work during the transforming process. The results will contribute towards our understanding of how transformers function today and help develop more efficient models in the future. 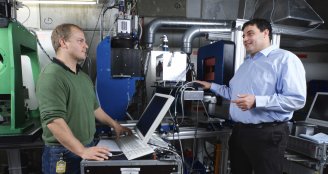 “The transformer’s ring-shaped magnetic iron core is a fundamental element necessary for voltage increase or decrease”, explains Grünzweig. The tiny magnetic domains within the core play an essential role in this process. The magnetic orientation within each domain is uniform. Experts refer to the boundaries between these as domain walls. If the iron core is magnetized, this results, at a microscopic level, in all domains pointing the same way. In other words, the domain walls disappear.

“The decisive factor for an efficiently functioning transformer is domain-wall mobility”, says Benedikt Betz, the first author of both studies and doctoral student in Grünzweig’s team. This is because our power lines carry alternating current with a frequency of 50 Hertz. As a result, a transformer’s iron core is re-magnetized 100 times per second, being re-poled from north to south and vice versa in rapid succession. The domains are hence thrown backwards and forwards: the greater their flexibility, the better the transformer performs. 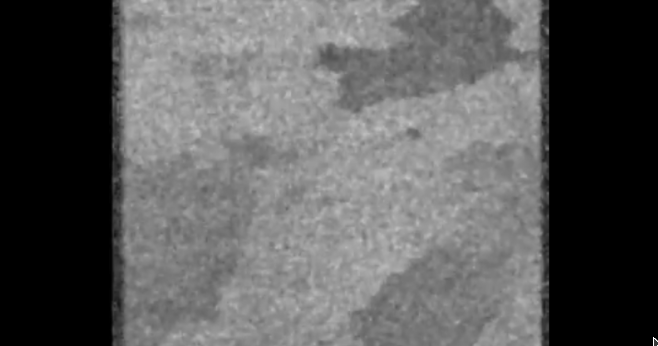 Domänenwände im Eisenkern eines Transformators The film shows how neutrons visualise domain walls in the interior of a transformer’s iron core as black lines. In time, as the surrounding magnetic field gets stronger, the domain walls disappear. (Video: PSI/Benedikt Betz and Christian Grünzweig)

In a study directed by Benedikt Betz, Grünzweig’s team has investigated what happens when a transformer is connected to a direct current, which is first increased and subsequently decreased again. As the voltage increased, the black lines disappeared, showing that the iron core was uniformly magnetized in one direction. Only in this state does the iron core transfer voltage efficiently. Once the voltage was subsequently reduced, the lines – and the domain walls they represent – reappeared. This first study provided the basis for further investigations.

In a second study, the researchers mimicked a more realistic scenario by applying an alternating current. When varying the voltage and the frequency of the alternating current, they found that there were certain thresholds of each of these parameters, beyond which domain walls either disappeared or appeared to freeze.

“These insights do not lead directly to better transformers”, Christian Grünzweig admits. “What we are doing is offering science and industry a new examination method.” And it’s come just at the right moment. Since last year, the EU’s Ecodesign Directive, which Switzerland has also agreed to implement, has urged the energy sector to improve transformer performance. So far, the development of transformers took place more or less on the basis of trial and error: why a new transformer functioned better than an older version was never really clear. This new, more accurate information on the magnetic processes taking place within the iron core will now enable a more target-oriented optimisation of transformers.

The potential for improvement is vast. According to estimates, large distribution transformers lose about 38 terawatt-hours worth of energy annually throughout the EU – more than half the annual energy consumption of Switzerland. Improving transformer efficiency by even just a few percent would lead to savings equating to the power production of several power stations.