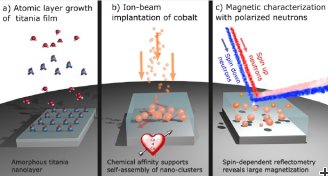 TiO2 thin films (a) The 68 nm thick amorphous TiO2 thin films were synthesized with atomic layer deposition before (b) Co was implanted at low energies (20−60 keV). © The resulting nanostructures were studied with low-angle polarized neutron scattering with specular reflected beams.

The speed of microelectronics is currently limited by heating, as increased speed also increases the power dissipation. Spintronics or Spin-Electronics is a new concept allowing for much higher speed. It is based on the manipulation of the electron spins in magnetic layers buried inside the devices. A high magnetization of these magnetic layers is desirable in spintronic devices to allow for efficient manipulation of the electronic states. However, the magnetic moment in promising dilute magnetic oxide nanocomposites is very low, typically corresponding to only fractions of a Bohr magneton for each dopant atom.

In the current project we studied a new type of material consisting of thin TiO2 films with implanted clusters of cobalt. Using the Polarized Neutron Reflectometry at NREX and PLATYPUS (ANSTO, Australia) allowed us to measure the distribution of the magnetic cobalt atoms and showed a large magnetization up to 2.5 μB/Co in the certain Co-rich region. The results of the present study allow to optimize the process parameters of ion implantation of magnetic materials in a non-magnetic matrix to generate the high local magnetizations necessary for multifunctional components in spintronics.