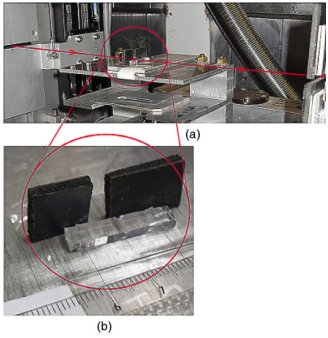 Stress corrosion – combined action of mechanical stress and corrosion by water from the surrounding atmosphere – is often the cause of crack propagation in glasses. A study by neutron reflectivity at the Laboratoire Léon Brillouin (IRAMIS / LLB) of samples of silica glass fractured under an atmosphere of heavy water (D2O) shows a high penetration of water into the glass. Concentration below the surface of rupture is so important that it suggests the presence of a high damage around the crack tip. These observations show the need to develop new models of stress corrosion.

By observing the slow growth of cracks caused by the impact of a little stone on the windshield of your car, you will probably see a phenomenon of stress corrosion. If your windshield was under high vacuum, these cracks do not propagate because they are no enough mechanically stressed. But exposed to a humid atmosphere, water molecules help the mechanical stress, both together allowing the propagation of the initial cracks induced by the initial shock.

Although this phenomenon – and its associated nuisances! – has been known for a long time, quantitative models were proposed only in the eighties. However, these models are not fully satisfactory, mostly for two reasons. Not only they do not take into account the amorphous character of the glass structure, but they also make the assumption that the chemical reaction (hydrolysis), which actually provokes the breaking of atomic bonds, takes place only at the crack tip and nowhere else.

We therefore sought to detect the presence of water within the glass. For this, the measurement of the thermal neutron reflectivity is a sensitive technique to the presence of light elements, which can be even increased by using heavy water (D2O), whose presence alters the reflectivity ten times that light water (H2O). We have broken in a controlled manner pure silica samples in a heavy water atmosphere, and we have compared the neutron reflectivity of our fracture surfaces to the reflectivity of an unstrained “control” specimen. Reflectivities measured on the horizontal time-of-flight EROS reflectometer at LLB-Saclay show that the reflectivities of two fracture surfaces – fracture was performed for two different loads – are significantly higher than the one of the control sample, which shows that heavy water is indeed trapped within the broken specimens. 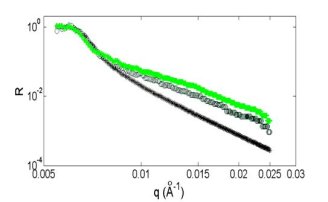 In both studied cases, the measurements indicate an average penetration depth of heavy water of about 10 m below the surface of rupture, with a very high concentration (35% for the lowest applied load, 57% for the highest load) over the first 4 nm. Hwever, the diffusion coefficient of water in silica is so small that such a mechanism may seem unlikely: under normal conditions, a water molecule can progress in the material by one nanometer only in more than one hundred days! But it is well known that if a material is stressed, diffusion is considerably accelerated. Since stresses relax behind the crack, the water that has penetrated is then trapped under the fracture surface.

So, the interpretation of the measured reflectivity curves needs to take into account the enhanced diffusion by the highly concentrated stress at the crack tip. The relaxation, induced by the crack propagation, entraps the water that has penetrated under the fracture surface of the material, changing its neutron reflectivity. In contrast with the assumptions of all classical models, the very high concentration of heavy water, measured in the first 4 nanometers below the surface, indicates that the “enhanced by stress” diffusion of water leads to a heavy corrosion damage of the material.

A systematic study of the reflectivity as a function of the applied load would allow us to propose a new model of stress corrosion, the study of this model system giving a new understanding for a phenomenon of great technological importance.

These results come from a collaboration between 3 laboratories of IRAMIS:

but also from a collaboration with: