Evidence of topological excitations in a quantum magnet 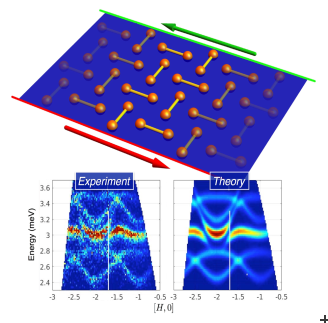 Evidence of topological excitations in a quantum magnet The top panel shows the orthogonal arrangement of “dimers” in SCBO. The dimers are formed of pairs of magnetic copper ions which are in a quantum mechanical superposition with zero total magnetic moment. It requires a finite energy to break-up this superposition and induce a net moment. These excitations are called “triplons”, in order to express that they behave as quantum mechanical particles. The coupling between spins of adjacent dimers is responsible for the peculiar motion of triplons as well as for the strong interactions between them. In a small magnetic field perpendicular to the dimer planes, the magnetic excitation acquire a topological character. This goes hand-in-hand with the appearance of excitations that circulate around the edges of the sample. The bottom panel shows the comparison between the excitations measured by inelastic neutron scattering using the LET spectrometer at ISIS and theoretical calculations based on a model of interacting triplons.

Condensed matter physics is the study of how matter can organise itself. The different forms a material can take are called phases, and these phases determine the properties of the material – for example metals, magnets, insulators or superconductors.

Conventionally, each phase can be characterised by examining the material on a local level. However, over the last ten years, there has been a revolution in our understanding of matter through the realisation that there are states of matter that cannot be distinguished with local observations alone. Instead you need to understand the system as a whole. A team from Oxford, UCL and STFC have been using ISIS to study a quantum magnet system, and their results could pave the way for a novel class of materials.

The distinction between such phases is encoded in so-called topological numbers, which are precise measures of the nature of these phases. By analogy, the topology of the Earth can be defined by its shape – specifically the number of “holes” it has. A solid sphere has no holes, a doughnut has one, pretzels (usually!) have three. However, a person standing on the Earth would not be able to tell it was a solid sphere rather than a pretzel or doughnut shape just by looking at their local environment. Instead you could use a global observation – like a satellite photo. You might guess it by watching a solar eclipse and not seeing a hole in the Sun’s shadow. Or you could compare observations from different people around the planet. But the local environment alone does not give us enough information.

In so-called topological insulators, the topological number is computed from the quantum mechanical wave function of the electrons. Such topological phases have experimental signatures even though we cannot distinguish them locally from more conventional phases. This is because where there is a boundary between a topological insulator and a trivial insulator, the boundary conducts electricity like a metal – the presence of this surface state being determined by the topology of the solid.

In this new Nature Physics paper from a team of theorists and experimentalists at Oxford, UCL and the STFC Rutherford-Appleton Laboratory, the topological revolution in condensed matter physics is advanced in three ways. Firstly, experimental evidence is found that in a particular quantum magnet SrCu2(BO3)2 (SCBO) topology plays an important role. The material has magnetic copper ions sitting on a lattice (see figure) such that the magnetic interactions bind the magnetic moments together into pairs of total spin zero. One implication of the reported experiment is that in contrast to usual topological insulators which have metallic surface states, SCBO instead has magnetic surface states. Secondly, the signatures of topology are found to live in the excitations about a very simple ground state. Thirdly, it is found that interactions are a crucial ingredient to our understanding of these systems whereas in ordinary topological insulators interactions may essentially be neglected. In short, this paper paves the way to the exploration of a completely new set of topological insulating materials with novel properties. It raises new questions such as the extent to which such systems appear in nature and whether they may lead to new technologies.