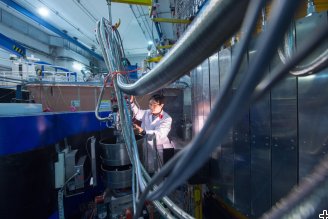 One week of beam time at the PUMA have been enough for international research teams from Beijing and the USA to prove theoretical calculations experimentally. The results bring the global community of superconductors a good deal, because this small, but very important puzzle part has confirmed a theory.

TUM scientist Jitae Park is not only responsible for the PUMA instrument but also an expert on superconductors. “It is important to have full understanding on the whole phase diagram to explain the exact functioning of superconductors. For this, we spent great effort to study the dynamics of the spins in the normal state (non-superconducting state), as we have demonstrated in 2014 that the symmetry changes of the electronic phases of high-temperature superconductors are accompanied in the dynamics of the electron spins”, he explains the current research approaches. ”Yet, this was not the end”, he added. It is hitherto undisputed that iron-containing superconductors have a nematic phase, in which the electronic order violates the underlying lattice symmetry. Whether the nematic phase originates from the degrees of freedom of the orbitals or whether the spins are responsible for this, the scientists still discuss. For the practical use of these superconductors in the future it would be enormously important to know eventually what triggers this transition. To this end, scientists from all over the world have already used a variety of different analytical methods. One of the theses discussed worldwide states that this nematic phase is closely related to the degree of freedom of the spins. However, the necessary proof has not yet been provided.

In order to possibly confirm the theory, the international authors used the publication BaFe1.935Ni0.065As2, which they examined with neutrons at the PUMA instrument. They observed that the spin-spin correlation slightly below the structural transition also decreases, suggesting that the nematic phase has a strong influence on the spin motion. Quod erat demonstrandum: Together with the results of previous measurements, the experimental proof that the nematic electronic order is a consequence of the degree of freedom of the electron spin is thus produced.