Exploring new materials for supercapacitors: how do ionic liquids diffuse in nanopores? 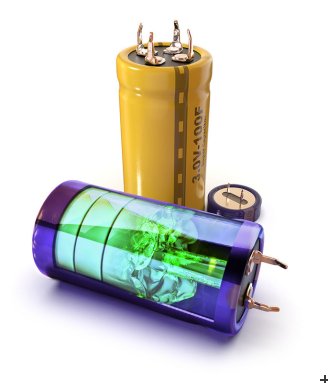 Supercapacitors are up-and-coming, energy storage devices, often used to store energy from renewable energy sources like wind turbines where power is intermittent. They combine the best of batteries and traditional capacitors – like batteries, they are able to store lots of energy but are faster to charge and are not made from toxic materials, and like capacitors, charge is accumulated through the adsorption and desorption of ions from an electrolyte on the surface of an electrode, which also makes it lightweight and low cost. Getting this right is important as wind farms now provide 14% of the European Union’s power!

Much research has been conducted into the potential use of ionic liquids for supercapacitors due to their concentration of ions, which when used in combination with porous carbon materials makes a promising replacement for the materials currently used.

These carbon materials with pores at the nanoscale have very large surface areas – like finding the surface of an entire football field confined within one cubic centimetre. This gives them interesting and unique properties, such as unusual diffusion dynamics and movement of liquids when compared to bulk, unconfined liquid.

There are, however, difficulties in putting this in to practice. The high viscosity of ionic liquids – the resistance of a fluid to flowing – in conjunction to being confined to such tightly packed spaces, can also cause mobility to be so slow that the accumulation of charge may not be sufficient in the supercapacitor.

As such, the implementation of these systems remains a challenge due to an insufficient understanding of the mobility of such liquids in porous materials, and further research into their diffusion properties is required. While the dynamics of any liquid in these confined spaces are traditionally difficult to assess, neutron scattering techniques can provide extraordinary insight into this landscape.

Scientists at the ILL, working alongside condensed matter physicists and materials scientists at Hamburg University of Technology, used quasi-elastic neutron scattering techniques to explore the mobility of ionic liquids in nanoporous carbons. The team used a well-studied room-temperature ionic liquid, 1-N-butylpyridinium bis-[(trifluoromethyl)sulfonyl]imide, and studied its diffusion properties inside a range of carbide-derived carbons with various pore sizes developed at the Drexel University.

“The ionic liquid we used is very interesting because they not only consist of ions but are also liquid at room temperature,” says Mark Busch, Physicist at the Hamburg University of Technology. “This is unconventional for pure ionic systems – for example, salt ions are of little use at room temperature because it is solid. Only at higher temperatures, where the solid has melted into liquid, do its ions become mobile and we are able to exploit its ionic properties.”

“There are many advantages to this. Most importantly, compared to other solutions, ionic liquids have a wider electrochemical window, which means they can be used at higher voltages without decomposing electrolytically. As a consequence, ionic liquid-based capacitors can store more electrical energy.”

While scattering techniques have been used for countless research studies into self-diffusion dynamics, a unique feature for the IN16B neutron backscattering spectrometer is its ability to conduct inelastic fixed window scans. This means scanning a sample parameter, in this case temperature, while observing only one specific energy transfer value, in order to get an overview of the dynamic landscape within a wide range of temperatures and pore sizes.