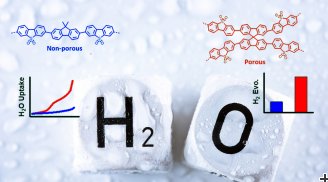 Solar hydrogen can be produced from water and light in a process called photocatalytic water-splitting and could help to mitigate the impact of climate change, as no fossil fuels are used in its production. It then can be used as a renewable, environmentally friendly energy carrier, such as in hydrogen fuel cells. Nonetheless, it has proved a major scientific challenge to scale-up photocatalytic water-splitting to a stage where it could viably be used to produce hydrogen in enough quantities to revolutionise clean energy.

Photocatalysts for water-splitting have long been explored, with inorganic materials such as TiO2, WO3, CdS and SrTiO3 being the focus of much research. Yet, such photocatalysts can be toxic to the environment and thus if used on an industrial scale for the production of hydrogen, could cause widespread harm.

Interest in the potential of organic photocatalysts mainly based on carbon and hydrogen atoms has been renewed in the last decade, as materials that are widely available in nature and non-toxic have a clear advantage over more harmful inorganic alternatives. They are also more easily processed than inorganic photocatalysts.

Unlike inorganic photocatalysts that are most active under UV radiation, organic photocatalysts can be synthetically modified using low temperature synthesis conditions to be active under visible light radiation, the most abundant component of natural sunlight. “Among the organic photocatalysts, conjugated microporous polymers (CMPs) are very promising materials as their complex pore networks are thought to hold potential for boosting water splitting”, says Dr Guilbert from Imperial College London. Thus, scientists at the Institut Laue-Langevin (ILL), along with colleagues at Imperial College London, the University of Liverpool, decided to explore the exact role of the CMPs pore networks in the photocatalytic process.

The original research, published in Chemistry of Materials, is the first study of its kind that utilises neutron spectroscopy to probe the guest-host dynamics of water and CMP systems. The scientists compared a range of porous networks (so called ‘conjugated microporous polymers’) and nonporous linear polymers. All organic photocatalysts based on either fluorene or dibenzo[b,d]thiophene and six different polymer linkers were used to create a variety of materials and the neutron scattering study focused on two of the CMPs.

Looking at the structural dynamics of such a complex and small-scale system requires extremely powerful analytical techniques. Neutron instruments are an ideal tool in this case and unique amongst other probing techniques in being able to detect even the lightest elements like hydrogen. The instruments at ILL are also highly flexible, allowing the exploration of time and length scales specific to the underlying microscopic mechanisms of the water-CMP interaction that forms the basis of the water splitting reaction.

“The primary measurements of the mass transport within the pore networks were measured by quasielastic neutron scattering (QENS) on the IN6 instrument, a time-of-flight spectrometer. This enabled us to probe the local structural dynamics of water-CMP guest/host system. IN6 offers appropriate conditions for studying the guest/host dynamics thanks to the good signal to noise ratio, suitable energy resolution, and a pico-second timescale coverage, which is well suited to explore the water splitting process of interest”, says Dr. Mohamed Zbiri from the ILL.

The analysis of the photocatalytic activity shows that porous conjugated polymers outperform the linear equivalents in the majority of combinations, indicating that the pores have a significant boosting effect on the water-splitting process. The neutron scattering study highlights the impact of hydration on the dynamics of certain CMPs, through varying the water content in the sample. “This will enable design of even more active materials for the water splitting process, as the neutron experiments suggest microporosity is beneficial for photocatalytic hydrogen evolution”, says Dr. Sebastian Sprick from the University of Liverpool.

These results build on the exciting progress towards the viability of organic photocatalysts for water splitting, taking us closer towards the use of hydrogen as a fuel to replace non-renewable energy sources, and ultimately contributing to limit climate change. In addition, the knowledge gained on how neutron scattering can reveal behavioural details of organic porous materials will allow for the design of new materials for a range of different fields beyond water splitting.