First evidence of Higgs mechanism in a magnet

By using neutron scattering experiments, researchers expect to have observed the typical characteristics of a phase transition based on the Higgs mechanism. 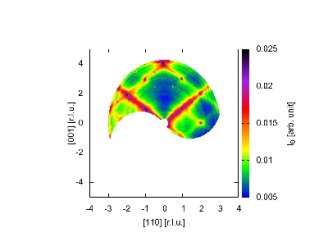 About the British physicist Peter Higgs has been much talk recently. Researchers at the European Nuclear Research Center CERN in Geneva were more likely to prove what he predicted in the 1960s as a Higgs boson. His proposed Higgs mechanism explains how elementary particles get their mass – and also plays a role beyond elementary particle physics. By using neutron scattering experiments, an international research team found the first indication that this mechanism can explain a phase transition of exotic magnetic states in a Yb2Ti2O7 crystal near absolute zero. During the cooling of a so called “quantum spin ice” state, they observed for the first time evidence of a spontaneous exchange with what Peter Higgs had predicted as a Higgs field in a magnet. The results are published in “Nature Communications”.

In phase transitions, materials pass from one state to another. A common example is the melting of ice. In addition, there are phase transitions of electronic and magnetic states. The magnetization of iron happens, for example, below a certain critical temperature only due to the electromagnetic interactions between electrons and the magnetic moments, the so called spins. But not every magnetic phase transition can be explained this way. This is confirmed by the results of a team of German, Taiwanese, Japanese and British scientists, who found the first experimental evidence of a so-called Higgs transition in a Yb2Ti2O7 crystal at temperatures close to absolute zero.

The existence of this phase transition had long been known, but what exactly happened, remained unknown. Experiments with polarized neutrons at the outstation of the Forschungszentrum Jülich at the Research Neutron Source Heinz Maier-Leibnitz (FRM II) in Garching near Munich now threw light on it. By using neutrons, the magnetic structure of materials can be measured with atomic resolution. The high intensity of the Garching neutron source also made it possible to detect the weak signals from the sample. In addition, the experiments could be carried out at the necessary low temperatures.

The researchers expect to have observed the typical signs of a phase transition based on the Higgs mechanism. “To our knowledge, this was the first detection of a Higgs transition in a magnet,” says Yixi Su, instrument scientist at the Jülich Centre for Neutron Science in Garching. As a central part of the Standard Model of Physics, the Higgs mechanism explains why particles – and also electrons and quarks, of which the atomic nuclei are made of, – have a mass at all. It is caused by the Higgs field that is present throughout the universe, but cannot be observed directly. But elementary particles – and quasi-particles, as in this case, – can interact with it and thereby get their mass.

The exact understanding of these quantum-mechanical electromagnetic phenomena is essential for modern physics. Among others, our current information technology is based on it. The researchers now want to use the Yb2Ti2O7 crystal as a model system to study interesting properties of quantum spin liquids. They depend also on further neutron scattering experiments. “Currently, no other method is as sensitive,” Su says.