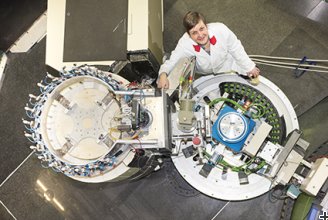 Scientists from EPFL and PSI have shown experimentally, for the first time, a quantum phase transition in strontium copper borate, the only material to date that realizes a famous quantum many-body model.

Many physical phenomena can be modeled with relatively simple math. But, in the quantum world there are a vast number of intriguing phenomena that emerge from the interactions of multiple particles — “many bodies” – which are notoriously difficult to model and simulate, even with powerful computers. Examples of quantum many body states with no classical analogue include superconductivity, superfluids, Bose-Einstein condensation, quark-gluon plasmas etc. As a result, many “quantum many-body” models remain theoretical, with little experimental backing. Now, scientists from EPFL and the Paul Scherrer Institut (PSI) have realized experimentally a new quantum many body state in a material representing a famous theoretical model called the “Shastry-Sutherland” model. The work is published in Nature Physics.

While there are several one-dimensional many-body models that can be solved exactly, there are but a handful in two-dimensions (and even fewer in three). Such models can be used as lighthouses, guiding and calibrating the development of new theoretical methods.

The Shastry-Sutherland model is one of the few 2D models that have an exact theoretical solution, which represents the quantum pairwise entanglement of magnetic moments in a square lattice structure. When conceived, the Shastry-Sutherland model seemed an abstract theoretical construct, but remarkably it was discovered that this model is realized experimentally in the material Sr2Cu(BO3)2.

Mohamed Zayed in the lab of Henrik Rønnow at EPFL and Christian Ruegg at PSI discovered that pressure could be used to tune the material away from the Shastry-Sutherland phase in such a manner that a so-called quantum phase transition to a completely new quantum many body state was reached.

In the Shastry-Sutherland model, the atomic magnets — arising from the spins of the atom’s electrons — are quantum-entangled in pairs of two. The researchers found that in the new quantum phase the atomic magnets appear quantum-entangled in sets of four – so-called plaquette singlets. “This is a new type of quantum phase transitioand while there have been a number of theoretical studies on it, it has never been investigated experimentally,” says Rønnow. “Our system may allow further investigations of this state and the nature of the transition into the state.”

The need for high pressure limits what is experimentally feasible at the moment. However, Rønnow and Ruegg are building a new neutron spectrometer (CAMEA) at the Paul Scherrer Institute, which will be ready at the end of 2018, as well as another one at the European Spallation Source in Sweden, which will become operational in 2023. The 4-spin state in strontium copper borate will be among the first experiments for these new machines. As a next step, experiments combining pressure and magnetic fields may give access to yet undiscovered phases in quantum materials.

“Quantum many-body physics remains a challenge where theory has only scratched the surface of how to deal with it,” says Rønnow. “Better methods to tackle quantum many-body phenomena would have implications from materials science to quantum information technology.”