Freeze-frame of an enzyme 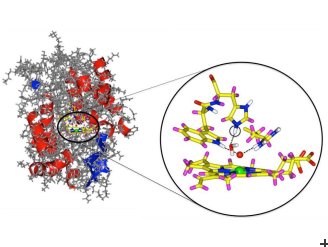 Molecule structure of Cytochrome-c-Peroxidase Cytochrom c peroxidase enzyme with a detail from the active center. The oxygen atom is marked in red and the iron in green. The newly discovered hydrogen atom is circled. | © Andreas Ostermann / TUM

Iron containing heme enzymes play a vital role in our bodies. Hemoglobin transports oxygen to the cells and the enzyme cytochrome c peroxidase degrades hydrogen peroxide. Using the BIODIFF neutron instrument, which is jointly operated by the Technische Universitaet Muenchen (TUM) and the Forschungszentrum Juelich, an international research team has successfully determined the precise nature of the bond to an oxygen atom in an important intermediate state.

Cytochrome c peroxidases (CCPs) are members of the large family of iron-containing heme enzymes. The heme group contained in these enzymes plays a role in many important biological processes and is found, among others, in hemoglobin, which gives human blood its red color. The main task of the investigated CCP is the reduction of hydrogen peroxide (H2O2), thereby detoxifying cells in practically all breathing organisms.

The reaction proceeds in multiple steps in which the complexly folded CCP molecules adopt various intermediate states. The so-called intermediate state Compound I exists in many heme enzymes that transfer oxygen and play an important role in breaking down medications.

In spite of countless investigations, the exact structure in the active center remained unclear. Especially the important bond between the iron and oxygen atom in the active heme center has been the subject of controversial debates over the past 30 years. One question in particular remained open: whether an hydrogen atom is bonded to the oxygen – or not, as the scientists have now surprisingly determined.

Both spectroscopic and X-ray investigations failed to decipher the intermediate structure. The ionizing X-rays split water molecules in the protein crystal, thereby releasing free electrons that the iron in the active center of the enzyme reacts with. This, in turn, changes the state of the active center. 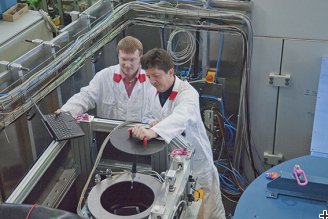 “Neutrons do not bring with them this risk of ionization. In addition, neutrons are particularly sensitive to hydrogen atoms,” explains Dr. Andreas Ostermann of the TU Muenchen. Together with Dr. Tobias Schrader of the Forschungszentrum Juelich, he supervised the measurements at the Heinz Maier-Leibnitz Zentrum (MLZ) and provided the raw data for the analysis.

“Neutron scattering thus complements X-ray analysis ideally whenever the position of hydrogen atoms needs to be determined,” explains Schrader. “The ability to capture intermediates at cryogenic temperatures combined with the information available from neutron crystallography, means that we can finally see the hydrogen atoms” says Professor Peter Moody from the University of Leicester.

The researchers headed by Professor Emma Raven and Professor Moody of the University of Leicester investigated the CCP enzyme crystals at both the ILL Neutron Source in Grenoble and the Research-Neutronsource Heinz Maier-Leibnitz (FRM II) of the TUM in Garching.

While the resting state of the enzyme was measured at room temperature at the ILL, the researchers determined the Compound I state at low temperatures at the FRM II. To this end, the protein was treated with hydrogen peroxide, flash frozen in the activated intermediate state and analyzed using the BIODIFF diffractometer at a temperature of minus 173° Celsius. This was the only way to retain the enzyme in its intermediate state for the analysis.

Using neutron diffraction Emma Raven and her colleagues discovered that the iron in the active center is bound only to a single oxygen atom. In other words, there is no hydrogen atom bound to the oxygen. To their surprise, the scientists also discovered a group in the active center that includes an additional hydrogen atom that was hitherto unknown. The reaction mechanism of the entire family of enzymes thus needs to be reconsidered.