Mushroom pickers never reveal their places of discovery and neither for Dr. Matthias Rossbach. Instead, they have sent him the dried mushrooms they collected in Bavaria, Lower Saxony and Brandenburg, for scientific research. 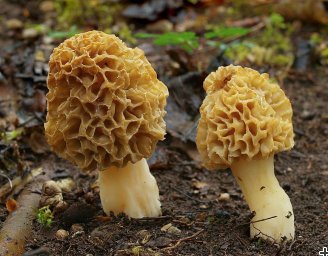 Although the Morchella esculenta occur frequently in Europe and the American continent, it is a very valuable mushroom because of its excellent taste. It can be found between March and June mostly in sparse floodplain forests. Like almost all of the edible fungi, it is considered to be healthy because of its high mineral content and is even used medically to inhibit tumor growth, as an antioxidant, and to stimulate the immune system. With all these already well-known and investigated facts, it is astonishing that the exact element composition was studied only for Turkish and Pakistani Morchella esculenta, but not for Germans and certainly not after the reactor accident of Chernobyl.

Matthias Rossbach from the Forschungszentrum Jülich and his colleagues, now made up for this; on this occasion, they also have examined the content of almost 20 other elements by Prompt Gamma Neutron Activation Analysis (PGAA) together with Dr. Zsolt Revay and Dr. Christian Stieghorst at the Heinz Maier-Leibnitz Center in Garching and the Neutron Activation Analysis at the Research Reactor in Mainz. Since Chernobyl both mushrooms and game are rarely, or not at all, to find on a German menu. The content of Caesium137 is, so to speak, a measure for the radioactive exposure of the fungi. As expected, the Bavarian Morchella esculenta contained most of Caesium137, the ones of Lower Saxonian contain the least and the Brandenburg morels in between. Nevertheless the good news for fans of morels: even the content of the Bavarian morels measured only a twentieth of the permitted limit value for food.

The content of the other investigated elements varied widely depending on the location, since the elemental composition of the Morchella esculenta was not determined before, comparative values are lacking. The Pakistani scientist found in the morels of there much lower values of all elements, but he failed to specify the type of pretreatment prior to the measurement of the fungi; therefore, these results may have different reasons. What Rossbach find particularly astonishing is the very high (but still uncritical) content of aluminum and arsenic in the German fungi: “Fungi often live in a close, almost symbiotic, neighborhood with trees and thereby exchanging substances. This is essentially due to the element phosphorus, which can absorb important metal cations for trees. However, cadmium and especially aluminum is toxic for trees. Perhaps Morchella esculenta do not emit these elements and act as a natural filter for the tree roots.” However, until now this has not yet been researched and, in particular, it is completely unknown how and why the fungi absorb these elements and retain them. Hence, the next question for science waits for answers …