Getting to grips with corrosion 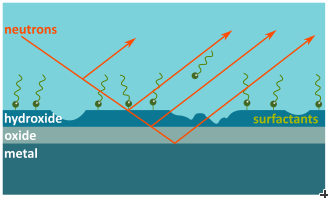 In Neutron Reflectometry for Studying Corrosion and Corrosion Inhibition, published in Metals, Mary Wood and Stuart Clarke of the University of Cambridge discuss the great potential of neutron reflectometry to improve our fundamental understanding of corrosion and corrosion inhibitors. NR presents some challenges, in that very clean and flat samples are required, low neutron flux can dictate long measurement times and gaining access to international facilities is a competitive process. However, NR is a powerful and non-destructive tool that can characterise the thickness, roughness and composition of metal films, their oxide layers and protective organic layers deposited at the surface. After reviewing the range of corroding systems and related phenomena that NR has been used to study, the authors conclude that it is not yet being used to its full potential in this area.

The complexity of corrosion

Much more than obvious rust, corrosion is the oxidative degradation of materials – mainly metals – and can be accompanied by the formation of oxidation products on surfaces. Corrosion can be uniform or localised (pitting, for example), and these two types have different implications for engineers and research scientists.

The costs of corrosion are phenomenally high, with industrialised countries spending three to four per cent of GDP dealing with its effects, and this makes studying corrosion a high priority. However, it is an extremely complex process involving numerous inorganic phases, and the fundamental study of these systems can be challenging. Neutron reflectometry offers a powerful tool for studying key aspects of corroding systems in situ, including the dependence on film composition thickness and roughness in different environments.

In milder environments, the formation of passive oxides can protect some metals against further corrosion. Organic or inorganic inhibitors can also be used to bind to the metal surface and halt dissolution, by polarising the cathodic and/or anodic areas of the surface to decrease the current density. Although this is referred to as a barrier effect, in depth studies show that most successful inhibitors stabilise specific reactive sites on the surface.

The complexities of the corrosion processes are such that a combination of investigative techniques is required to fully characterise them, including optical microscopy, X-ray and neutron diffraction and atomic force microscopy. The authors review a number of case studies to demonstrate that NR is a powerful tool for corrosion studies, particularly when used in combination with other imaging methods.

Unlike X-ray scattering, which is dependent on electron density, neutron scattering displays an apparent independence from position within the periodic table. This attribute is particularly useful in corrosion inhibition studies, as NR is able to characterise organics as easily as metals, rather than showing a higher sensitivity to heavier elements. The scattering length often shows a significant difference between two isotopes, and can also have a contribution from magnetic interactions of neutrons with the sample. This is exploited in polarised neutron reflectometry (PNR), but for corrosion studies it is often more useful to collect two reflectivity profiles for the same system, with the incident beam polarised up- and down-spin. This constrains the fits possible, giving greater confidence in the fitted model, and also allows ‘tuning’ of the metal contrast to emphasise specific elements of the system.

The review shows that aluminium has been fairly well studied with NR, with work looking at (e.g.) the adsorption of organic molecules and the behaviour of adsorbed materials under shear condition. A small number of studies are relevant to corrosion. In one, a custom-made NR cell allows the monitoring of extreme environments on corrosive behaviour, observing subtle chemical changes in situ. In another, a detailed characterisation was made of a vandate-based protective film spin-coated on aluminium, and small-angle X-ray and neutron scattering (SAXS and SANS) were combined with NR and X-ray reflectivity (XRR) in work to develop a better model of the structural changes of anodised aluminium, used to provide a more corrosion-resistant surface. 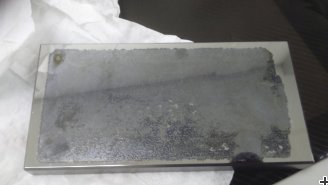 Titanium is also well-represented in the literature, and changes in the passive titania layer in aqueous solutions ​have been observed using NR, over a range of applied potentials. A study under a more corrosive sulfuric acid environment observed that titanium was self-healing when anodic potentials were applied, but not under a cathodic bias. This highlighted the ability of NR to provide detailed structural information of buried levels that appear essentially identical to (e.g.) X-rays.

The magnetic behaviour of nickel allows it to be studied with polarised neutrons, an approach that is particularly useful monitoring void growth below the surface. Studies suggest that once the air/film surface has been penetrated, extensive in-plane corrosion below the surface follows.

Iron and steel remain relatively unstudied with NR, despite their industrial importance. Preparation of suitably thin and flat films is challenging, but PNR is a particularly powerful technique for iron studies, and offers great scope for emphasising components of interest. In a study of iron corrosion in a variety of environments, for example, NR was invaluable in characterising the adsorption of organic inhibitors and simultaneous protection or dissolution of the metal in situ.

The authors continue with a review of the smaller bodies of work on copper and tantalum, then move on to NR work related to corrosion studies, including in situ probes of electrochemical systems, examinations of silane barrier films, and battery material studies. They show that NR is a powerful technique to monitor chemical and morphological changes and for fundamental studies of corrosion and corrosion inhibitors. The existing body of work demonstrates the potential of NR to greatly improve our understanding in these commercially-important applications.