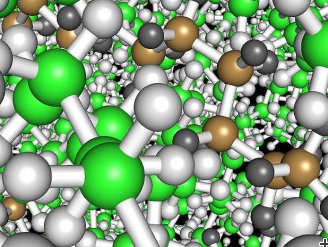 Movement of long chain molecules In computer simulations, the FAU researchers calculated the movements of the long-chain molecules – and found that they have viscous and elastic properties as well. | © T. Unruh

For the first time Prof. Dr. Tobias Unruh and his team (Friedrich-Alexander-University Erlangen-Nuremberg (FAU)) have demonstrated with neutrons how long-chain molecules in their liquid melt move.

The theory says that these melts are not only as viscous as honey on the molecular scale, but that they also have elastic properties similar to a rubber band. This so-called viscoelasticity leads to co-ordinated movements of larger groups of atoms within the melt. The results contribute to a better understanding of mass transport in liquids, which plays a crucial part in many technologically relevant processes, for example in charging and discharging batteries, electrolysis, and chemical reactions such as catalysis in the liquid phase.

The FAU working group Nanomaterials Characterisation (Scatter Methods) examines the movements of molecules in liquids and biological membranes for understanding how molecules are transported, for example in organic liquids and cell membranes. As part of his doctoral thesis, Humphrey Morhenn combined neutron scattering experiments, in which the movements of the molecules are made visible via their interactions with neutrons, with sophisticated computer simulations in which the molecular movements were calculated using physical models.

This combination allows for unprecedented, detailed observation and analysis of the highly complex movements of molecules. ‘Neutron scattering is astoundingly effective in allowing us to observe the molecules, which are millionths of a millimetre in size, performing movements that take only fractions of a second. The same external conditions under which the sample is examined, for example pressure and temperature, are used in the computer calculation as well,’ says the head of the working group, Prof. Dr. Tobias Unruh.

The experiments were conducted at the TOFTOF spectrometer at Heinz Maier-Leibnitz- Zentrum in Garching. A thin aluminium container is filled with a liquid, heated to 236 degrees Celsius, and placed in the spectrometer’s neutron beam. What happens next is, to put it simply, that the neutrons collide with the molecules and change their speed and trajectory. This change of movement is what the scientists measured.

The changes in trajectory and speed allow the researchers to make conclusions regarding the atoms and their movement in the liquid. The results of these experiments correspond with those of the computer simulations to a remarkable extent. A detailed evaluation of the computer simulation reveals that the atoms of the molecules move together through the liquid for a short time before these groups fall apart, the atoms join other groups which then too fall apart, and so on.

With this experimentally supported simulation calculation, the researchers, in close collaboration with a theory group at the University of Strasbourg, were able to show for the first time that viscoelastic hydrodynamic interactions have a significant influence on the movements of molecules in polymer melts on a short time scale. ‘The results we achieved form a valuable basis for future examinations, especially in the area of protein-membrane interactions – for which a DFG Research Training Group was approved at FAU only a few weeks ago,’ says Tobias Unruh.

The work was carried out in close collaboration with Forschungsneutronenquelle Heinz Maier-Leibnitz at Technische Universität München, Forschungszentrum Jülich, and the University of Strasbourg, and was supported by the German Research Foundation, partly through the Cluster of Excellence Engineering of Advanced Materials (EAM) at FAU.