How do protein crystals grow? 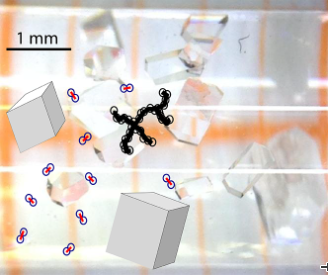 Two lysozyme molecules float as dimers in the solution, illustrated by two circles with a red connecting line. Branched fractals (black circles connected by thick black lines) coexist with the growing crystals (gray cubic objects). In the background you can see a photo of lysozyme crystals in front of a graph paper background.

How do protein crystals grow?

Researchers from MLZ (Forschungszentrum Jülich) investigated the crystallization of the protein lysozyme in an experiment at the Institut Laue-Langevin (ILL).

They focused on conditions that result in particularly large crystals, which would be sufficient for the method of high-resolution neutron protein crystallography. In neutron protein crystallography, there is the particular need for producing large crystals to obtain atomic resolution. Many applications of this method fail due to the lack of sufficiently large crystals.
The studies on the crystallization of lysozyme showed that fractals play a major role in crystal growth. Fractals are objects of individual lysozyme molecules, which are always arranged in the same structure even at infinite magnification. The lysozyme molecules initially form long straight chains. In a later stage of crystallization, the chains increasingly branch out and form a self-similar three-dimensional fractal object. These objects continue to grow and then they form the first crystal nuclei. Later, these objects are then incorporated as a whole in the growing crystals.