How long do antiparticles live in gummy bears? 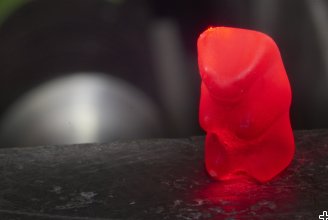 Dried gummy bears are not necessarily to everyone’s taste. Also, anti-matter, specifically positronium atoms seem not to feel as well in dry gummy bears. They annihilate much faster than in watered gelatin sugar mixture: Instead of 1.9 after 1.2 nanoseconds. Two physicists at the Technical University of Munich have now demonstrated this phenomenon experimentally and thus can influence the development of coatings for drugs.

PD Dr. Christoph Hugenschmidt and Hubert Ceeh fired red gummy bears at various stages of drying with positrons, the antiparticle of the electron. Positrons can be produced in small quantities in the laboratory (for this test) or in a large amount with the positron source Nepomuc of MLZ at the TU München. The positron and an electron form in the gummy bears an exotic atom called positronium. The positronium is caught in tiny pores of gummy bears, so-called nanopores. The smaller this nanopore, the shorter is the lifetime of the positronium. With the lifetime of the positronium, the physicists could therefore determine at the same time the volume of the nanopores in the gelatin mixture of sugars.

Of course the two physicists are not primarily concerned about gummy bears. Rather, the candy is a model system for biopolymers, which consist mainly of gelatin and glucose. Tailored gelatin is widely used in pharmacy, to coat pills. The requirement: The coating should both be mechanically stable and protect the drug from oxidation, and on the other hand dissolve at a certain time in the stomach and release the active ingredient. For the targeted development of such biopolymers the characterization of the free volume plays a prominent role. And here comes the antimatter into play: “We can determine the volume of the nanopores especially in disordered systems such as crosslinked gelatin with positron as highly mobile probes “ says Hugenschmidt. “The greater the free volume, the more oxygen can penetrate and damage the drug, but also the less brittle is the gelatin.” The non-destructive measurements of gummy bears therefore helps to develop sustainable and customized gelatin capsules.