Hunt for Mister X: With neutrons on the search for an unknown particle 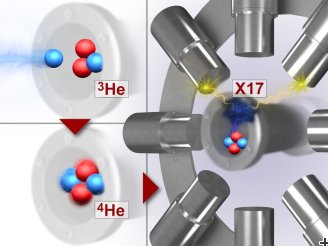 X-17 With this setup the physicists from ATOMKI want to retrieve the X17. The circular arranged detectors observe the photons in which the X17 decays. Credit: Reiner Müller

The world of physics is in uproar as a Hungarian team is said to have discovered a yet unknown particle with puzzling properties. This would not only go beyond the current understanding of physics but also bring in reach a decades-long dream in physics: An approach to dark matter.

The team in question around nuclear physicist Attila Krasznahorkay from the Atomki Institute for Nuclear Research in Debrecen (Hungary) observed an anomaly first in the excitation of beryllium and then also helium nuclei.

Anomaly due to a new particle, the X17

The 17 stands for the mass in usual units of nuclear physics (17 MeV exchange particle- boson) and the “X” for its puzzling properties. Theorists postulate it could be an exchange particle of a new fundamental force (meaning an additional fifth elementary force to the gravitational, the electromagnetic, the strong and the weak nuclear force). This would be the first link between observable matter, which makes up everything visible in the universe, and the hidden dark matter, whose existence has been confirmed but its nature remains unexplainable.

The hunt for the X17 starts

In their experiments in 2016 the researchers fired protons on thin probes of lithium-7 and examined the thus formed beryllium nuclei. In the meantime, the Hungarian physicists have been able to replicate their results with an improved experimental setup and to detect the anomaly also in the excitation of helium nuclei. A good sign but it also skeptical voices rised. So far, no other group has succeeded in observing this particle. Therefore, the X17 is still fighting against the accusations of being a measurement error or an effect of the measurement method which could be explained in a classical way.

Is the X17 really an exchange particle? And could it explain dark matter?

These questions are related to whether the X17 has a spin or not, which can be imagined as if it spins around itself or not. A confirmation of its existence would be sensational and revolutionary! The Maier-Leibnitz Zentrum (MLZ) at the research neutron source Heinz Maier-Leibnitz (FRM II) in Garching supports the hunt as well.

Helium with neutrons under attack

The Hungarian Physicists have devised an experiment where they fire neutrons onto the lighter helium isotope helium-3, in order to achieve the necessary excitation of helium. The excited helium-4 nuclei are observed while decaying into two flashes of photons. The X17 itself would be created during the decay of the exited helium nucleon. This would only be possible, if the X17 has no spin.

“We have a very high flux of cold neutrons at the instrument PGAA (prompt gamma activation analysis) at the MLZ in Garching. This is exactly what is needed for such experiments”, says Christian Stieghorst, instrument scientist at PGAA.

There were already first measurement and first indications

“We were able to detect the anomaly, but we didn’t have enough data to confirm it with sufficient statistical significance,” says Zsolt Revay, instrument scientist at the PGAA. Such a precise measurement must be well shielded against the background radiation. The Hungarians are working on this and want to return next year with an improved setup. “A joint interpretation of the results of the experiments performed at Atomki Debrecen and FRMII may give a more accurate value for the spin of the X17 particle.” says Attila Krasznahorkay.

Further measurements with neutrons are already planned for 2021.