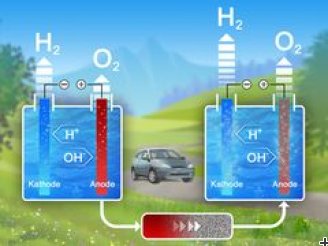 Hydrogen as an energy carrier will play an important role in the energy turnaround. But to produce it from water in a CO2-neutral way by electrolysis, it needs a lot of electricity. Neutrons help to study materials that can reduce the electricity consumption in this reaction.

Electric current breaks down water into its components hydrogen and oxygen. However, this so-called electrolytic splitting has several disadvantages. Firstly, the efficiency of the reaction is not optimal. Catalysts reduce the energy requirement of chemical reactions – the use of catalytically active electrode materials therefore ensures more hydrogen at the same voltage. Secondly, the oxidation of water produces oxygen, which under these conditions is very corrosive to the electrodes – the electrode material must be able to withstand all this.

Novel materials that are catalytically active on the one hand and can resist this corrosive environment on the other are currently being researched worldwide. Scientists at the Technical University of Berlin have synthetically produced the naturally occurring mineral stannite (Cu2FeSnS4) and electrochemically deposited it as a thin layer on carrier materials such as metallic nickel.

This composition serves as the starting material for the actual catalyst: During the electro-catalytic reaction, tin (Sn) and sulphur (S) are completely dissolved out, which changes the entire structure of the compound. All that remains of the stannite as the actual catalyst is FeOOH bound in a copper-containing matrix.

This catalyst is clearly superior in activity to the catalyst materials commonly used up to now, such as precious metal oxides and iron or tin sulfides, the researchers have found. In addition, unlike precious metal compounds, it consists exclusively of elements that are abundant in the earth’s crust, such as iron, tin and sulphur.

However, catalytic processes can only be understood and the materials used further improved if the structure, chemical bonding and changes are known.

Neutrons at the MLZ diffractometer SPODI have been used to elucidate the complex structure of stannite: Compared to other methods, neutron diffraction distinguishes the elements iron and copper or tin and sulphur, which are similar in the number of electrons.

“The Rapid Access Program, the fast access to the instrument and the measured data, is a key component in the success of this collaboration, but also of the entire program,” says Dr. Anatoliy Senyshyn, instrument manager at SPODI.

Stannite is the first compound in this substance class for which the suitability as a starting product for catalytically active electrode materials for the production of hydrogen was investigated. It enables a step towards CO2-neutral and more energy-efficient hydrogen technology.