Ice in fuel cells imaged directly for the first time

Researchers from the Paul Scherrer Institute (PSI) have succeeded in imaging the distribution of frozen and liquid water in a hydrogen fuel cell directly for the first time. They applied a new imaging technique that uses successively two beams with different neutron energies to distinguish between areas with liquid water and those with ice extremely reliably. The method therefore opens up the prospect of studying one of the main problems of using fuel cells to power vehicles: ice can clog the pores in the fuel cells and affect their performance. The PSI scientists’ results will be published in the journal Physical Review Letters on 16 June 2014. 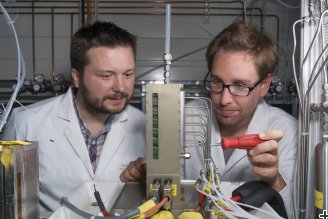 Boillat and Biesdorf experiment The researchers Pierre Boillat and Johannes Biesdorf in an experiment in which they switched on a fuel cell without preheating at temperatures below zero degrees Celsius. Photo: Paul Scherrer Institute/Mahir Dzambegovic.

Hydrogen fuel cells have the potential to make individual mobility of the future more environmentally friendly. In the cells, hydrogen as a “fuel” reacts with oxygen electrochemically and produces electrical current. The only by-products are heat and water. The latter, however, can pose a problem for fuel-cell drives in practice: in colder climes, the water can freeze when the drive is switched off and affect the performance. Now, for the first time, a method developed by PSI researchers enables the distribution of ice and water in a fuel cell to be observed directly, which opens up a new possibility to study the problem of ice formation more effectively and optimise its solution.

The problem of ice formation

Ice can accumulate in the porous structures of the electrodes in a fuel cell. The ice hampers the cell’s performance by clogging the pores that allow the oxygen to pass through to the positive electrode (cathode). If the oxygen fails to reach the cathode, the electrochemical reactions during which the cell produces electricity can no longer take place. Consequently, the voltage in the cell collapses and it stops supplying power. The porous electrode structure also allows water to flow out of the fuel cell. The fluid that remains after operation can then freeze overnight, for instance. As ice occupies a greater volume than liquid water, the formation of ice can cause mechanical damage to the cell components.

Imaging water with neutrons exploits the fact that the neutrons are strongly scattered (deflected) by the hydrogen atoms. The intensity of a directed neutron beam is thus greatly reduced if it crosses a medium with lots of hydrogen. With the new technique, Dual Spectrum Neutron Radiography, the extent of this weakening depends on the kinetic energy of the water molecules. In the frozen state, the kinetic energy is much lower than in the liquid state, which enables liquid water to be distinguished from ice. If one wanted to distinguish water and ice in a conventional neutron experiment, one would have to know the thickness of the water layer studied beforehand. In fuel cells, however, that usually is not possible. The researchers found an alternative: they successively measured their samples with two neutron beams.

The new imaging technique enables the researchers to compare how two neutron beams with different neutron energy spectra are attenuated by the water molecules. One of these beams was filtered so that it only contained neutrons with low energies. The second beam, however, was left in its original form with the entire energy spectrum. The proportions of liquid water and ice in the cell are extracted from the ratio of the attenuation of the two beams, without having to know a water-layer thickness beforehand. Indeed, the ratio of the attenuation depends solely on the different strength with which liquid water and ice deflect the neutrons. Therefore, the aggregate state of the water can be determined by comparing the measurements with the filtered and unfiltered neutron beam.

Through their measurements on the neutron beamline ICON at the PSI’s own neutron source SINQ, not only were the PSI researchers able to map the distribution of water and ice in a fuel cell; they also managed to find direct evidence for an old hypothesis concerning the behaviour of water in fuel cells: namely, that water might be present in fuel cells in a super-cooled state. Super-cooled means that the water does not even freeze below zero degrees Celsius. Thanks to the direct imaging, the authors of the new study were able to demonstrate that water in the cell remained partly in the liquid state at temperatures as low as minus 7.5 degrees. “The evidence that there is super-cooled water in fuel cells is not just important from a theoretical point of view,” says Thomas Justus Schmidt, Head of the Electrochemistry Laboratory and co-author of the study. “For the practical application, it is also good to know that you’ve got a temperature margin where you don’t have to worry about ice formation.”

About PSI
The Paul Scherrer Institute PSI develops, builds and operates large, complex research facilities and makes them available to the national and international research community. The institute’s own key research priorities are in the fields of matter and materials, energy and environment and human health. PSI is committed to the training of future generations. Therefore about one quarter of our staff are post-docs, post-graduates or apprentices. Altogether PSI employs 1900 people, thus being the largest research institute in Switzerland. The annual budget amounts to approximately CHF 350 million.