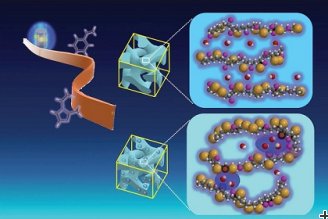 Scientists from Jülich together with colleagues from Japan have discovered how fuel cell membranes can be improved without the use of rare and expensive precious metals such as platinum. The anion-exchange membranes studied are a key component of certain polymer electrolyte fuel cells and serve to transfer charged particles (anions) while at the same time retaining gases such as oxygen or hydrogen.

Just how suitable properties can be attained while remaining highly resistant to alkaline degradation in the cells is demonstrated by the researchers with the help of neutron scattering experiments carried out at Forschungszentrum Jülich’s outstation at the Heinz Maier-Leibnitz Zentrum in Garching near Munich. The study contributes to a better understanding of the interplay between the structure and properties of the membranes that should one day make it possible to rationally design membranes with optimal properties.

Fuel cells have great potential to reduce our dependence on fossil fuels and the air pollution this brings, thus lessening the impact on climate change. However, several obstacles have until now hampered their broader success. One of these is that for a long time, scientists and engineers relied on catalysts based on precious metals. These are efficient and stable, but unfortunately also expensive and only available in small quantities.

In contrast, fuel cells using anion exchange membranes instead of proton-exchange membranes (Anion-Exchange Membrane Fuel Cells, AEMFC), can do without acid-resistant precious metals. Their electrodes consist of inexpensive, non-precious metal catalysts. However, their performance and long-term stability are not yet sufficient, despite major advances over the past decade in developing new materials and optimizing system design. The biggest difficulty is that the very properties that make the membranes so efficient have up to now simultaneously reduced their long-term stability. For the first time, researchers from Jülich and Japan have succeeded in producing and characterizing membranes in which this correlation appears to have been overcome.

Standard anion-exchange membranes are usually made of a robust, electrically non-conductive, gas-impermeable and water-repellent polymer layer. In order to conduct hydroxide ions, tiny areas are chemically modified to become hydrophilic. The resulting ion channels are usually less water repellent and are liable to swell up. As a result, the alkaline environment rapidly causes degradation and the membrane loses its functions in that area. Due to the fact that as many channels as possible are needed to reach high performance, as a general rule the more efficient the membrane, the faster its lifespan decreases.

The membranes presented in this study were produced by Japanese researchers working at the car manufacturer Daihatsu and the National Institute for Quantum and Radiological Science and Technology (QST) in Takasaki using one of several common methods: graft polymerization. In the process, they to a certain extent implanted areas in the membrane with different properties. For the grafting, they used hydroxide-conducting and water-repellent units in various mixing ratios. At first, they were surprised to see that more hydrophobic and fewer hydrophilic grafts led to higher water uptake, and therefore to increased alkaline degradation, and vice versa.

However, detailed investigations of the microstructure of the grafted membranes revealed the cause. In the first case, small water puddles formed in many places. “In those areas, alkaline degradation has an easy job of it”, explains Dr. Aurel Radulescu from Forschungszentrum Jülich, Jülich Centre for Neutron Science (JCNS). He is First Instrument Scientist at the neutron small-angle scattering facility, where the researchers conducted these studies. Neutron scattering is particularly suitable in this case as it can distinguish, under the appropriate experimental conditions, between the hydrogen atoms of the membrane and those of water. A method called “contrast variation” makes this possible. Hydrogen is replaced by deuterium, heavy hydrogen, in the samples which are thus “labelled”.

The neutron scattering studies also showed that the membrane’s lifespan increased when it had more hydroxide-conducting and fewer hydrophobic grafts, causing the water regions to be homogeneously distributed. “In order to design new ion-exchange membranes, not only their composition but also their microstructure should be taken into consideration, along with the distribution of the ionic groups and the water in the conducting regions”, emphasizes Radulescu. The German-Japanese research team has therefore proposed a model which for the first time can quantitatively explain the distribution of the graft polymers in either the conducting or non-conducting phase. It can be applied to all functional graft polymer membranes.