Investigating the origin of excellent thermoelectric behaviour in Cu2Se 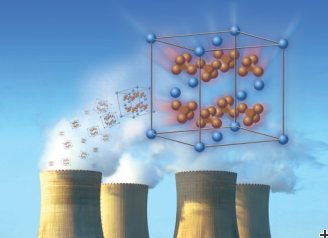 In a world that is trying to balance an ever-increasing demand for electricity with a reduction in carbon emissions, energy efficiency is a hot topic. Researchers are keen to find ways to exploit the thermoelectric effect, wherein a temperature difference across a thermoelectric device leads to a voltage difference, in essence turning heat into electricity.

As thermoelectric devices have no moving parts they are currently used in space craft (such as the voyager probes) to produce power over decades without maintenance. Modest improvements to their efficiency would open up numerous applications on Earth, harvesting waste heat in car exhausts or power stations and even using body heat to power wearable electronics.

But there is a problem. We need a material that is electrically conducting and good electrical conductors are normally good thermal conductors. This means that any temperature difference quickly disappears and the device efficiency drops. The very best thermoelectrics minimise the heat carried through vibrations of the crystal lattice (either by scattering or slowing them down), without affecting the electronic conductivity, thereby boosting device performance.

The experiments were designed to test the Phonon-Liquid Electron-Crystal (PLEC) approach, first proposed in 2012 as a new way to produce materials with good thermoelectric properties. It suggested that materials with fast diffusion could act as a liquid in thermal terms, while remaining solid.

Whether or not the low thermal conductivity of Cu2Se is caused by diffusion, as the PLEC approach suggests, depends on the time scales involved. If the time between atomic jumps from one equilibrium position to another in a liquid is shorter than the vibrational period, waves do not propagate. If it is much longer, then waves propagate in the same way as in a solid.

The researchers used neutron spectroscopy to test the PLEC directly, using ISIS’ Let and Merlin instruments. Neutrons are the perfect tool for this job, as they can probe both diffusion and the lattice vibrations. Let was designed to investigate the microscopic origin of material properties, and its rep-rate-multiplication functionality allows researchers to simultaneously measure several incident energies of neutrons from every synchrotron pulse. In this experiment that meant that diffusion and lattice dynamics data could be collected at the same time, ruling out changes in the sample between experiments. What it showed was that the low thermal conductivity of Cu2Se couldn’t be caused by diffusion. Instead, it is most probably due to extreme anharmonicity (which governs how often vibrations are scattered) arising from the crystal structure. The PLEC approach has been disproved.

These results are good news for the future of thermoelectric devices. They suggest that we can make improvements to the current PLEC materials by doping them (adding in elements) or nanostructuring to suppress the thermal conductivity even further.