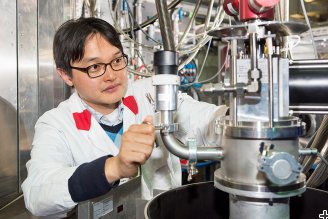 In the pantheon of unconventional superconductors, iron selenide is a rock star. But new experiments by U.S., Chinese and European physicists have found the material’s magnetic persona to be unexpectedly mundane. The group published the results in Nature Materials.

That conclusion is based on data from inelastic neutron scattering experiments performed over the past year at the three axes spectrometers PUMA and PANDA at MLZ, and at neutron sources in the U.S and the United Kingdom. The experiments produced the first measurements of the dynamic magnetic properties of iron selenide crystals that had undergone a characteristic structural shift that occurs as the material is cooled but before it is cooled to the point of superconductivity.

“Iron selenide is completely different from all the other iron-based superconductors in several ways,” said Dai, a professor of physics and astronomy. “It has the simplest structure, being composed of only two elements. All the others have at least three elements and much more complicated structure. Iron selenide is also the only one that has no magnetic order and no parent compound.” 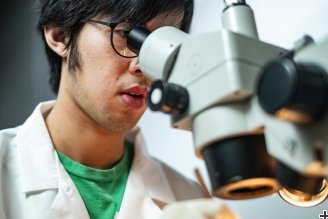 Tong Chen Graduate student Tong Chen spent weeks creating samples to test in neutron scattering beams. About 20 to 30 1-millimeter squares of iron selenide had to be aligned and glued in place atop each crystal of barium iron arsenide

Dozens of iron-based superconductors have been discovered since 2008. In each, the iron atoms form a 2D sheet that’s sandwiched between top and bottom sheets made up of other elements. In the case of iron selenide, the top and bottom sheets are pure selenium, but in other materials these sheets are made of two or more elements. In iron selenide and other iron-based superconductors, iron atoms in the central 2D sheet are spaced in checkerboard fashion, exactly the same distance from one another in both the left-right direction and forward-back directions.

As the materials cool, they undergo a slight structural shift. Instead of exact squares, the iron atoms form oblong rhombuses. These are like baseball diamonds, where the distance between home plate and second base is shorter than the distance between first and third base. And this change between iron atoms causes the iron-based superconductors to exhibit directionally-dependent behavior, like increased electrical resistance or conductivity only in the direction of home-to-second or first-to-third.

Physicists refer to this directionally dependent behavior as anisotropy or nematicity, and while structural nematicity is known to occur in iron selenide, Dai said it has been impossible to measure the exact electronic and magnetic order of the material because of a property known as twinning. Twinning occurs when layers of randomly oriented 2D crystals are stacked. Imagine 100 baseball diamonds stacked one atop the other, with the line between home plate and second base varying randomly for each.

“Even if there is directionally dependent electronic order in a twinned sample, you cannot measure it because those differences average out and you wind up measuring a net effect of zero,” Dai said. “We had to detwin samples of iron selenide to see if there was nematic electronic order.”

Study lead author Tong Chen, a PhD student in Dai’s research group, solved the twinning problem by cleverly piggybacking on a 2014 study in which Dai and colleagues applied pressure to detwin crystals of barium iron arsenide. It was impossible to apply the same method to iron selenide because the crystals were 100 times smaller, so Chen glued the smaller crystals atop the larger ones, reasoning that the pressure needed to align the larger sample would also cause the layers of iron selenide to snap into alignment.

Chen tested the samples and found the iron selenide was detwinned. Those tests with neutron scattering beams, amongst others with Dr. Astrid Schneidewind (Forschungszentrum Jülich) and Dr. Jitae Park (Technical University of Munich) at the Heinz Maier-Leibnitz Zentrum (MLZ) also showed iron selenide’s electronic behavior is very similar to that of other iron superconductors.

“The key conclusion is that the magnetic correlations that are associated with superconductivity in iron selenide are highly anisotropic, just as they are in other iron superconductors,” Dai said. “That has been a very controversial point, because iron selenide, unlike all other iron-based superconductors, does not have a parent compound that exhibits antiferromagnetic order, which has led some to suggest that superconductivity arose in iron selenide in a completely different way than it arises in these others. Our results suggest that is not the case. You don’t need an entirely new method to understand it.”

Jitae Park from MLZ added: “This information will help to establish the microscopic model for explaining the mechanism of unconventional superconductivity in the iron-based superconductors.”