ISIS ‘oils the wheels’ in the study of lubricant additives 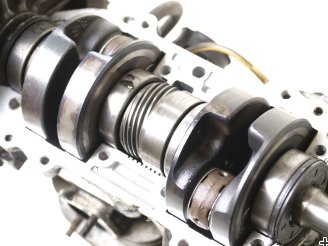 Lubricated machineparts Lubricants all work to a common goal – to reduce heat, noise and wear by reducing friction. Credit: Dreamstime

In times where cracking down on energy consumption, cutting emissions and saving resources are central environmental concerns – enhanced lubricants, with the potential to increase operating efficiency in many systems, are attracting global interest. In a recent study a collaboration of scientists from the BP Institute, at the University of Cambridge (Dr Stuart Clarke), and Queen Mary’s University of London (Dr Ali Zarbakhsh) have used neutron reflectometry to look at lubricant additives and their interactions with iron, a common engineering material, to discover how these molecules function.

Lubricants all work to a common goal – to reduce heat, noise and wear by reducing friction. Lubricants are often made up of oils mixed with chemical compounds, or additives, and it’s these different additives which give the finished oils their specific properties. There is an increasing need for improved fuel economy from engines to meet environmental targets and friction modifier additives can contribute to improved fuel economy benefits from lubricants. Engine oil lubricants make up half of the lubricant market and part of their purpose is to extend the life of moving parts operating under different conditions of speed temperature and pressure. But it’s not just the modern passenger car engines that require tailored lubricants – railroad and diesel engines, high speed gas and steam turbines, hypoid gears, industrial processing machinery and many other devices benefit from additives and the advances in performance they provide. 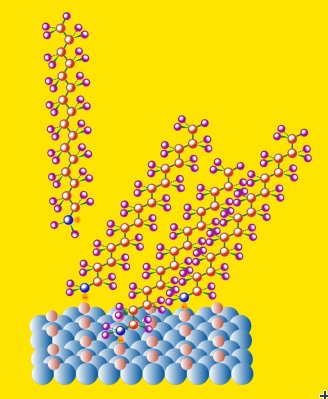 Dr Stuart Clarke, BP institute, University of Cambridge explains, ‘The lubrication of surfaces by oils is a key aspect of many industrial problems with significant financial implications to industry and the economy generally. Molecular additives are useful in a number of roles such as friction modification where they are believed to help two surfaces slide past each other or as corrosion inhibitors where they can prevent a metal surface being damaged.’

In 2004 37.4 million tones of lubricants were consumed worldwide. This huge market presence, however, comes with financial implications with the cost of disposal of used or waste lubricants. However if these lubricants can be made more efficient this would lead to less waste.

Dr Stuart Clarke explains ‘This area of science is growing in importance. We have advances in engine technology combined with lower emission requirements, and also the demand for fuel efficiency, improved friction reduction and the desire for longer oil change intervals. Hence, understanding the role and adsorption of lubricant additives at the oil metal interface is essential.’

The key to achieving high levels of performance in a finished lubricant is to understand the interactions of the base oil, additives and the surfaces to which they adsorb and to match these to machine requirements and operating conditions. In many commercial applications these additives are believed to act by adsorption to the metal surfaces, creating a thin film between moving metal surfaces that can reduce friction. In this study the team used polarised neutron reflectometry on the Polref instrument to observe the molecular additive, hexadecylamine, on the surface of iron and to understand how the molecules function. Neutron reflection is able to provide a unique insight, with the ability to ‘see’ the surface of this engineering material in its working conditions (at the metal/oil interface). This reflection approach is particularly powerful when combined with the techniques of ‘contrast variation’ and the use of polarised neutrons which both help in solving the experimental reflectivity data and deducing the correct structure of the surface and the species adsorbed there.

Stuart explains, ‘Neutrons offer several advantages – they can tell us which species are at the surface, how many are there and what their structure is. However these systems are very complex and no one single technique tells us all that we would like to know. Our group applies a number of related techniques such as Sum Frequency Spectroscopy, Sensitive Calometry and X-Ray Photoelectron spectroscopy. Together with the neutron experiments these techniques help us to understand these and other related systems.’

The results of the experiment revealed that the hexadecylamine additive showed strong affinity for the metal surface forming a dense monolayer at a relatively low concentration.

‘In this study we essentially confirmed a number of aspects of the adsorption that have long been proposed, but have never been observed previously’ explains Stuart, ‘The fact that such techniques can be used to study such complex systems and build up a detailed picture of the surface structure gives us confidence to move now to more unknown territory and in recent work we have started to look at how these layers are affected by temperature and imposed flow.’

This research was published in the Journal Langmuir