Using high resolution neutron scattering at the instrument TRISP of the Max-Planck Society at the Heinz Maier-Leibnitz Zentrum (MLZ), the lifetime of magnetic spin waves was measured and, for the first time, a correct theory was developed. 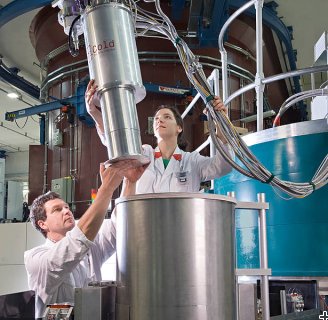 The aim of the study, which was published in Physical Review Letters: to understand the lifetime of magnetic spin waves in simple models of antiferromagnets. In contrast to the known ferromagnets (for example iron), the magnetic moments of neighbouring atoms in the less known antiferromagnets are oriented in the opposite direction.

The spin waves of the magnetic moments only live for some nano seconds, thus the waves are damped. This lifetime is a prerequisite to understand many material properties. For the first time, this was mesured using high resolution neutron scattering of the instrument TRISP at the FRM II. The results show that hitherto existing theories have predicted wrong lifetimes. Using the data of the measurements at TRISP, Alan Tennent of Helmholtzzentrum Berlin could develop a new theory. This will enable the calculation of lifetimes also in other materials.

Many new materials as high temperature superconductors or quantum magnets are antiferromagnets. The magnetic spin waves are fundamental for the function of these materials, but still not fully understood. The measurements at the MLZ will contribute to the further understanding.