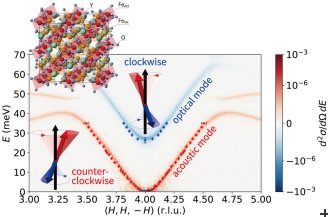 Understanding, manipulating and exploiting the intriguing magnetic behaviour of a synthetic crystalline material called yttrium iron garnet (YIG) could open the door to the next, advanced generation of communication and information-processing devices.

Experiments at the Institute Laue-Langevin (ILL) neutron beam facility in Grenoble, France have for the first time fully exposed the complex magnetic behaviour of YIG using one of the ILL’s specialised neutron spectrometers, IN20.

Neutrons, like X-rays, can be used to reveal the crystal structure of materials, but because neutrons have a magnetic moment, or spin, they can reveal their detailed magnetic structure and dynamics. IN20 is the only ILL instrument able to detect the subtle changes in energies, directions and changes in spin direction (polarisation) of neutrons passing through the YIG crystal in a precise enough way so as to probe how magnetic ‘quantum waves’, or magnons, created in YIG’s crystal structure, slowly precess like spinning tops.

Studying such magnons could be an important development in spintronics technology, in which the spins of electrons, as well as their charge, are used to create new advanced electronic devices. This emerging field of ‘magnonics’ may even have applications in quantum computing.

YIG is already a well-established technological material, having excellent magnetic and optical properties. It is used in microwave filters, and acoustic transmitters and transducers, as well as lasers. The iron-based garnet is a complex oxide with a chemical formula Y3Fe2(FeO4)3. It is magnetic due to the presence of the charged iron atoms (Fe3+ ions) in the repeating crystal structure. These ions each carry a magnetic moment, and at low temperatures the material appears to behave straightforwardly as a ferromagnet (like iron).

However, when looked at in more detail, the magnetic alignment becomes more complicated. This is because YIG’s molecular structure is made up of two structurally different types of interlocking crystal subunits, each caging an iron atom. As the chemical formula indicates, the two subunit types are in the ratio of two to three. The magnetic moments of the iron atoms in each type of subunit collectively align but in opposite directions – and because the ratio of opposing spins is two to three, there is still a net magnetisation – a phenomenon called ferrimagnetism, as distinguished from the more common antiferromagnetism in insulators where the moments cancel out.

To describe the dynamics of such behaviour, physicists use the language of quantum mechanics, whereby each collective disturbance of the aligned spins in their lowest quantum energy state is called a quantised spin wave, or magnon. A magnon is regarded as having particle-like characteristics such as a particular energy level and momentum – and also a spin like an electron or neutron. Applying a magnetic field causes a spin wave to ‘precess’ like a spinning top, just as a single electron spin might do.

In the ferromagnetic state, the magnetic moments in a magnon rotate in the same direction, counterclockwise, around the applied field and this is called positive polarisation. In an antiferromagnet, in which two sets of aligned magnetic moments exactly cancel each other, two magnon modes with opposite polarisations develop but with the same energies.

In a structurally complex ferrimagnet like YIG, however, something more interesting should happen. Theory has indicated that the magnons propagating through the crystal not only split into two branches with opposite polarisations but are also of different energies – a lower energy ‘acoustic’ mode and a higher energy ‘optical’ mode.

Until now, the two different polarisations had never been measured. This is where the neutron studies with IN20 come in. A neutron beam of given energy is passed through a sample, and interacts with the sample’s atomic nuclei and electronic moments. The changes in the neutron energy are then measured – and with them any rotation of the neutrons’ spin. The resulting energy spectrum provides a fingerprint of the various nuclear and electronic motions in the material, including spin. Because the ILL can deliver and measure neutrons of any given polarisation, any subsequent changes in that polarisation can also be measured.

By comparing the spectra obtained with those predicted by theory, a multi-national team of researchers was able for the first time to reveal the magnon polarisation in YIG, and in particular show explicitly the different natures of the acoustic and optical magnon modes. The experiment also showed that these quantum properties persist at room temperature.

The energy difference between the different types of magnons is in the thermal range, and so explains other properties of YIG such as those relating to the so-called spin Seebeck effect in which a ‘spin voltage’ is generated by applying a temperature gradient across a magnetic sample. The interactions between spin and heat transfer is significant in the emerging field of ‘spin caloritronics’, which has applications such as heat-sensing and waste-heat recycling.

One of the most interesting applications of this research arises from the fact that YIG is extremely pure, so that the magnons are very long-lived on an atomic scale, opening up the possibility of encoding quantum information. The fact that the excitations are still long-lived with well-defined polarisations, even up to room temperature, allows us to hope that these quantum phenomena can be exploited (and not just at very low temperatures). For example, devices can use the selective optical excitation of the different spin waves in YIG (which is insulating, thus carrying no charge current) to control the injection of pure spin currents into a neighbouring metal.