In oil extraction sites, gaseous methane is simply burned, even though it could actually be a useful precursor material for fuels and products of the chemical industry. One way to make methane usable is to convert it to methanol. Being liquid, methanol is easier to transport than methane, and it can be used both as fuel and as raw material for the chemical industry. Researchers at the Paul Scherrer Institute PSI and ETH Zurich have now developed a new chemical process that allows this conversion in an efficient and inexpensive way. In the long run, this could be deployed in compact technical plants, which might also be set up in oil fields. The researchers report their findings in the latest edition of the journal Science. 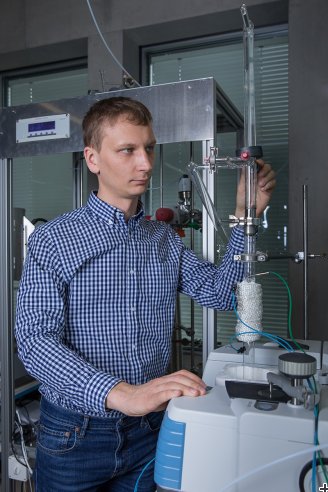 The researchers have shown for the first time that methanol can be produced from a combination of methane and water. “That is, to begin with, an important scientific discovery”, stresses Marco Ranocchiari, a research group leader in the Laboratory for Catalysis and Sustainable Chemistry at the Paul Scherrer Institute PSI. “Until now, it was not clear that water could be used to oxidise methane to methanol.” At the same time, this process would also have significant advantages for industrial practice. Today, the conversion of methane to methanol takes place in two process steps, under high pressure and high temperature, in industrial chemical plants that are much too large and expensive to be set up on individual oil fields. 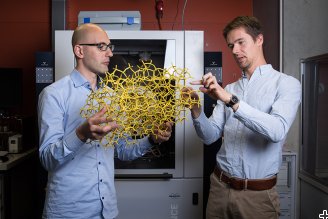 In the reaction developed by PSI and ETHZ, the conversion is a direct process and takes place under lower pressure, so that much simpler plants can be realised. This reaction is not the first by which methane can be directly converted to methanol – PSI and ETHZ researchers have also had a hand in developing a number of other reactions. “The new reaction, though, is considerably more selective than the others”, explains PSI researcher Dennis Palagin, one of the study’s authors. “That means the only by-product besides the methanol is hydrogen, which can for example be used for fuel cells. In the previously developed reactions, where for example oxygen or hydrogen peroxide is used for the oxidation, harmful substances such as carbon monoxide, CO2, or formaldehyde are produced as unwanted by-products.” 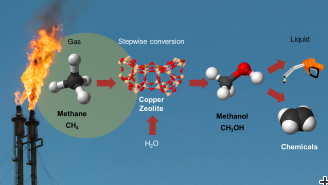 Understanding the reaction through experimentation and supercomputing

In addition to methane and water, there is yet another active material involved in the new reaction. At the surface of this material, methane molecules are split into the constituents carbon and hydrogen, which then can bind together with water to form methanol and hydrogen. The active material has the structure of a zeolite in which copper atoms are embedded, and these play a crucial role in the reaction. “Thanks to a combination of different experimental methods, we were able to shed light on the mechanism behind the reaction”, explains Vitaly Sushkevich, first author of the study, who designed the experiments. “For instance, we probed the reaction mechanism with infrared spectroscopy, and the changes in the copper with X-rays from PSI’s Swiss Light Source SLS. To verify that the methane was in fact oxidised by the oxygen from the water, we selectively replaced part of the oxygen with another isotope and thus could follow its path. The experiments were complemented by theoretical calculations at the Swiss National Supercomputing Centre at Manno, in Ticino.”

The research project was supported by funding from the Energy System Integration (ESI) Platform of the Paul Scherrer Institute.