Jülich scientist Nikolaos Biniskos together with his colleagues in a Franco-German research team has gained new insights into the inverse magnetocaloric effect with the help of neutron scattering studies. The results could be useful in the search for suitable magnetocaloric materials for energy-efficient heating and cooling systems. 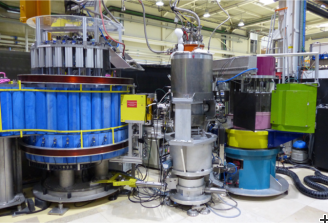 Cold neutron three-axis spectrometer IN12 At the cold neutron three-axis spectrometer IN12, operated along with two other neutron scattering instruments by the Jülich Centre for Neutron Science together with the French Alternative Energies and Atomic Energy Commission (CEA) at the Institut Laue-Langevin, the scientists studied the connection between spin dynamics and the occurrence of the inverse magnetocaloric effect in Mn5Si3. Source: ILL

Magnetocaloric materials heat up when they enter a magnetic field, and cool down again when they leave it. This phenomenon can be exploited to produce quiet, energy-efficient, and environmentally friendly heating and cooling devices, but the high cost of materials has however severely hampered its wider application in mass-market products. Scientists have known about this effect for more than 100 years: if the magnetic disorder decreases, that is to say, the magnetic entropy, then the lattice entropy increases and the material heats up. If the magnetic field is removed, the magnetic entropy increases and the material can extract heat from the surroundings.

Nikolaos Biniskos from Forschungszentrum Jülich and the French Alternative Energies and Atomic Energy Commission (CEA Grenoble) along with his colleagues have now studied a material in which the related inverse magnetocaloric effect occurs at low temperatures: the manganese and silicon alloy cools down when it enters a magnetic field and warms up again after leaving it. Using neutron scattering, the researchers showed that the fluctuation of the electron spins in the material play a role in the formation of the inverse magnetocaloric effect. They are triggered by a magnetic field; entropy increases because of this and gives rise to a cooling effect.

Neutron scattering is especially well suited to determining this kind of spin dynamic. In order to carry out the measurements, instruments at the French institute Laboratoire Léon Brillouin and the European research centre Institut Laue-Langevin were used, where the Jülich Centre for Neutron Science operates a neutron spectrometer. Due to the fact that very good monocrystals are available where spin fluctuations are clearly demonstrable, the Mn5Si3 alloy under investigation proved ideally suitable as a model system for similar materials.