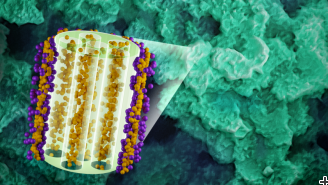 Batteries contain chemicals that store and release electrical energy at relatively slow rates compared to capacitors, which are often used in applications requiring power to be delivered rapidly.

Capacitors can charge and release energy quickly by using electric fields to store charges on negative and positive plates. The plates are separated by an electrolyte, a solid or liquid material that conducts ions. Applying a positive or negative electric potential to the capacitor causes the ions to flow in one direction or the other.

Newer capacitors, called supercapacitors, are made from advanced composite materials and nanomaterials that offer higher energy storage capacities and increased power, with a virtually unlimited cycle life. However, even higher energy densities are needed to enable supercapacitors to one day serve as sole power sources in high-power applications such as electric vehicles.

Scientists from the Massachusetts Institute of Technology conducted neutron research at the Department of Energy’s (DOE’s) Oak Ridge National Laboratory (ORNL) to investigate a new, highly porous nanomaterial that could function as durable, high-energy supercapacitors. The results of the study were published in Angewandte Chemie International Edition.

“MIT recently developed a metal-organic framework material that has excellent electrical conductivity and energy storage capacity,” said Mircea Dincă, W. M. Keck Professor of Energy in the Department of Chemistry at MIT. “If we can better understand how the MOF stores and releases so much electrical energy so quickly, we can perhaps turn it into a rugged supercapacitor material.”

Developing the next generation of electrode materials requires in-depth knowledge of their energy storage mechanisms. MOFs are crystalline materials comprised of metal ions and organic molecules, and they have micropores, which makes them good models for studying the mechanisms of charging and discharging.

To investigate the adsorption mechanism of ions in MIT’s porous, conductive MOF, the team made electrodes from the material and soaked them in a solvent containing a sodium triflate electrolyte. This enabled positively and negatively charged ions to flow freely when the researchers turned the voltage on or off and switched it to negative or positive and back again.

Using small-angle neutron scattering experiments at ORNL’s High Flux Isotope Reactor (HFIR), the researchers discovered that when the applied voltage is zero, the sodium ions in the electrolyte form a thin layer on the MOF’s rod-like building blocks while the solvent molecules penetrate into the pores. Applying positive or negative voltage causes the sodium ions or triflate ions, respectively, to also enter the pores. Subsequently reversing the polarity causes the ions inside the pores to switch positions with those outside.

“MOFs typically have high porosity, but poor electrical conductivity, which limits their use in high-power applications,” said Lilin He, a neutron scattering scientist at ORNL. “This conducting MOF is a highly porous nanomaterial with an extremely large overall surface area when you factor in all of the interior pores, gaps, and surfaces.

“Of equal importance to its conductivity is that this MOF showed only a 10% loss in capacitance and no increase in internal electrical resistance even after 10,000 cycles, which could indicate good durability for future commercial applications,” He added.

Neutron scattering is an ideal tool to observe the activity of ions inside MOFs, because neutrons can penetrate deeply into almost any material. They are also sensitive to the presence of light elements, such as the deuterium (an isotope of hydrogen) the researchers added to the electrolyte. The deuterated hydrogen in the electrolyte provided contrast to help see where the ions were located – even inside the millions of pores within the MOF.

The scientists next plan to produce variations of the MOF material and again use neutrons to study their energy capacities and determine if they are more efficient and faster, and how they perform at higher voltages.