Move Over, Lasers: Scientists Can Now Create Holograms from Neutrons, Too 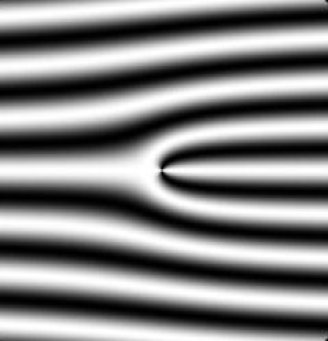 For the first time, a team including scientists from the National Institute of Standards and Technology (NIST) have used neutron beams to create holograms of large solid objects, revealing details about their interiors in ways that ordinary laser light-based visual holograms cannot.

Holograms—flat images that change depending on the viewer’s perspective, giving the sense that they are three-dimensional objects—owe their striking capability to what’s called an interference pattern. All matter, such as neutrons and photons of light, has the ability to act like rippling waves with peaks and valleys. Like a water wave hitting a gap between the two rocks, a wave can split up and then re-combine to create information-rich interference patterns.

An optical hologram is made by shining a laser at an object. Instead of merely photographing the light reflected from the object, a hologram is formed by recording how the reflected laser light waves interfere with each other. The resulting patterns, based on the waves’ phase differences, or relative positions of their peaks and valleys, contain far more information about an object’s appearance than a simple photo does, though they don’t generally tell us much about its hidden interior.

Hidden interiors, however, are just what neutron scientists explore. Neutrons are great at penetrating metals and many other solid things, making neutron beams useful for scientists who create a new substance and want to investigate its properties. But neutrons have limitations, too. They aren’t very good for creating visual images; neutron experiment data is usually expressed as graphs that would look at home in a high school algebra textbook. And this data typically tells them about how a substance is made on average—fine if they want to know broadly about an object built from a bunch of repeating structures like a crystal, but not so good if they want to know the details about one specific bit of it.

But what if we could have the best of both worlds? The research team has found a way.

The team’s previous work, performed at the NIST Center for Neutron Research (NCNR), involved passing neutrons through a cylinder of aluminum that had a tiny “spiral staircase” carved into one of its circular faces. The cylinder’s shape imparted a twist to the neutron beam, but the team also noticed that the beam’s individual neutrons changed phase depending on what section of the cylinder they passed through: the thicker the section, the greater the phase shift. Eventually they realized this was essentially the information they needed to create holograms of objects’ innards, and they detail their method in their new paper.

The discovery won’t change anything about interstellar chess games, but it adds to the palette of techniques scientists have to explore solid materials. The team has shown that all it takes is a beam of neutrons and an interferometer—a detector that measures interference patterns—to create direct visual representations of an object and reveal details about specific points within it.

“Other techniques measure small features as well, only they are limited to measuring surface properties,” said team member Michael Huber of NIST’s Physical Measurement Laboratory. “This might be a more prudent technique for measuring small, 10-micron size structures and buried interfaces inside the bulk of the material.”

Though they aren’t holograms themselves, these animations demonstrate data that proved that neutron beams—rather than the usual laser light—can be used to create holograms of solid objects, in this case a tiny aluminum plate with a spiral carved into one of its faces.

The first animation illustrates what happens as you slowly move back from the plate, which dominates as the bright circle in the center. Near the end, fainter circles appear at top and bottom (created by interference patterns in the neutron beams) that usefully show the outlines of the plate’s spiral surface.

Animation of neutron scanning data, demonstrating that scientists can use neutron beams to create holograms instead of the usual laser light.

Passing the neutron beam through successively thicker portions of the spiral plate produces the interference data used to create the second animation below, whose “fork” grows greater numbers of tines at right as the plate’s thickness increases. Combining these data with other neutron measurements can produce 3-D holograms, which could make neutron scan results easier for scientists to interpret visually.

Animation of neutron scanning data, demonstrating that scientists can use neutron beams to create holograms instead of the usual laser light.