Efficient storage technologies are necessary if solar and wind energy is to help satisfy increased energy demands. One important approach is storage in the form of hydrogen extracted from water using solar or wind energy. This process takes place in a so-called electrolyser. Thanks to a new material developed by researchers at the Paul Scherrer Institute PSI and Empa, these devices are likely to become cheaper and more efficient in the future. The material in question works as a catalyst accelerating the splitting of water molecules: the first step in the production of hydrogen. Researchers also showed that this new material can be reliably produced in large quantities and demonstrated its performance capability within a technical electrolysis cell—the main component of an electrolyser. The results of their research have been published in the current edition of the scientific journal Nature Materials. 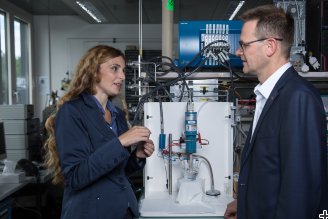 Since solar and wind energy is not always available, it will only contribute significantly to meeting energy demands once a reliable storage method has been developed. One promising approach to this problem is storage in the form of hydrogen. This process requires an electrolyser, which uses electricity generated by solar or wind energy to split water into hydrogen and oxygen. Hydrogen serves as an energy carrier. It can be stored in tanks and later transformed back into electrical energy with the help of fuel cells. This process can be carried out locally, in places where energy is needed such as domestic residences or fuel cell vehicles, enabling mobility without the emission of CO2.

Researchers at the Paul Scherrer Institute PSI have now developed a new material that functions as a catalyst within an electrolyser and thus accelerates the splitting of water molecules: the first step in the production of hydrogen. “There are currently two types of electrolysers on the market: one is efficient but expensive because its catalysts contain noble metals such as iridium. The others are cheaper but less efficient”, explains Emiliana Fabbri, researcher at the Paul Scherrer Institute. “We wanted to develop an efficient but less expensive catalyst that worked without using noble metals.” 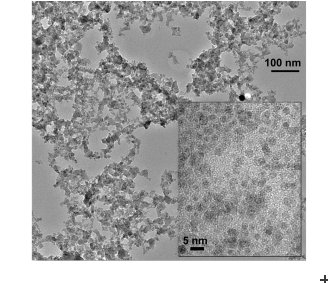 Exploring this procedure, researchers were able to use a material that had already been developed: an intricate compound of the elements barium, strontium, cobalt, iron and oxygen – a so-called perovskite. But they were the first to develop a technique enabling its production in the form of miniscule nanoparticles. This is the form required for it to function efficiently since a catalyst requires a large surface area on which many reactive centres are able to accelerate the electrochemical reaction. Once individual catalyst particles have been made as small as possible, their respective surfaces combine to create a much larger overall surface area.

Researchers used a so-called flame-spray device to produce this nanopowder: a device operated by Empa that sends the material’s constituent parts through a flame where they merge and quickly solidify into small particles once they leave the flame. “We had to find a way of operating the device that reliably guaranteed the solidifying of the atoms of the various elements in the right structure,” emphasizes Fabbri. “We were also able to vary the oxygen content where necessary, enabling the production of different material variants.” 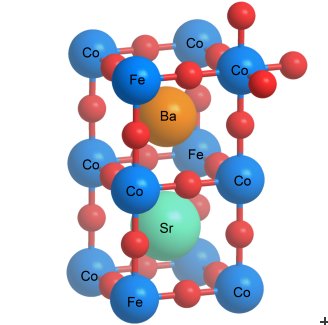 Researchers were able to show that these procedures work not only in the laboratory but also in practice. The production method delivers large quantities of the catalyst powder and can be made readily available for industrial use. “We were eager to test the catalyst in field conditions. Of course, we have test facilities at PSI capable of examining the material but its value ultimately depends upon its suitability for industrial electrolysis cells that are used in commercial electrolysers,” says Fabbri. Researchers tested the catalyst in cooperation with an electrolyser manufacturer in the US and were able to show that the device worked more reliably with the new PSI-produced perovskite than with a conventional iridium-oxide catalyst.

Researchers were also able to carry out precise experiments that provided accurate information on what happens in the new material when it is active. This involved studying the material with X-rays at PSI’s Swiss Light Source SLS. This facility provides researchers with a unique measuring station capable of analysing the condition of a material over successive timespans of just 200 milliseconds. “This enables us to monitor changes in the catalyst during the catalytic reaction: we can observe changes in the electronic properties or the arrangement of atoms,” says Fabbri. “At other facilities, each individual measurement takes about 15 minutes, providing only an averaged image at best.” These measurements also showed how the structures of particle surfaces change when active – parts of the material become amorphous which means that the atoms in individual areas are no longer uniformly arranged. Unexpectedly, this makes the material a better catalyst.

Use in the ESI Platform

Working on the development of technological solutions for Switzerland’s energy future is an essential aspect of the research carried out at PSI. To this end, PSI makes its ESI (Energy System Integration) experimental platform available to research and industry, enabling promising solutions to be tested in a variety of complex contexts. The new catalyst provides an important base for the development of a new generation of water electrolysers.