A new study carried out at the Institut Laue-Langevin in collaboration with researchers at the Lyons-University based Hospices Civils de Lyon has determined the most accurate microstructure ever obtained of human enamel. The research, published in the journal Materials Research Express, aims to provide greater insight into the chemistry behind the properties of tooth enamel and how it changes during the demineralisation caused by our bad eating habits. The team have been able to identify for the first time the location of critical hydrogen atoms within the enamel, work which will be extremely useful for their future analysis of Biodentine, a new material that could be used as a cement to encourage dental re-growth. 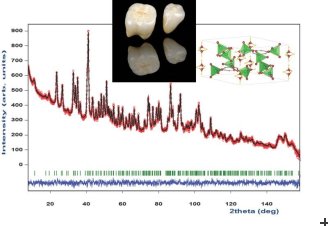 Neutron powder diffraction pattern of human enamel Figure 1. Plot of the observed (red circles) and calculated (continuous black line) neutron powder diffraction pattern of human enamel. The difference curve (yobs–ycalc) is represented (continuous blue line) below the tick marks (in green) indicating the positions of the Bragg reflections. Inset shows the region indicated by the doubled arrow and the indexing of the most prominent peaks.

Dental erosion is a very common condition, particularly amongst children, which not only causes discoloration but also increases sensations of pain when eating foods that are particularly hot, cold, or sweet. Unlike tooth decay, which is related to bacterial infection, dental erosion is caused by the build-up of acidic fluid in the mouth and can be caused by the overconsumption of acidic foods or even the recurring vomiting associated, for example, with gastroesophageal reflux disease, anorexia or bulimia. The erosion removes the layers of enamel and may expose the underlying, more sensitive dentin, which causes the pain. If left untreated, it can even lead to tooth cracking.

The most common treatment for dental erosion is fluoride remineralisation therapy. However, excessive use of fluoride can result in lesions that attack the enamel, and so alternative treatments continue to be investigated. Progress in this area is dependent on a more detailed understanding of the underlying crystal structure and related chemistry. However, despite numerous intensive studies, several ambiguities about the actual crystal structure of the tooth enamel remain. For instance, the amount and positions of hydroxyl ions (made up of one hydrogen atom attached to one atom of oxygen) are still under debate, as is the question of whether the overall crystal structure is monoclinic (where the crystals have different lengths along each of their three axes) or hexagonal (which produces six-sided crystals).

To address this uncertainty, Dr Selma Ouladdiaf and her colleagues at the Université de Lyon joined forces with Selma’s father, Dr Bachir Ouladdiaf, who uses the high-resolution powder diffractometer D2B at the Institut Laue-Langevin. The neutron techniques employed at the ILL represent a tool of choice for studying biological materials containing hydrogen, such as calcium hydroxyapatite which is the main constituent of human tooth enamel. Together they applied the neutron diffraction technique to a tooth recently extracted from an informed patient aged 21.

Following the neutron analysis, Selma and her colleagues found the original hexagonal hydroxyapatite model proposed in much of the literature to be a likely match to their results. The team also found evidence of a far greater concentration of hydrogen within the structural make-up of the enamel than previously thought. Hydrogen was in fact found to exist in three different environments within the compound: within hydroxyl ions, as attached hydrogen ions forming acid phosphate, and within strongly disordered H2O molecules in the form of lattice water and adsorbed water.

The team also found that the average crystalline size of the tooth enamel was 18 nanometres for the 21-year-old patient. As this crystallized size diminishes with tooth age, this affects the mechanical and chemical properties of the enamel for most people.

“These new insights into the crystallographic structure of enamel will help us understand in more detail the demineralisation effect,” said Dr Selma Ouladdiaf. “A better idea of the mechanisms behind the physicochemical properties of enamel will also allow us to more accurately assess the potential of any new remineralisation therapies.”