An international team of researchers led by the University of Leicester and the Institut Laue-Langevin have solved a long-standing mystery in biology by identifying the structure of a vital enzyme intermediate. The debate – which has raged within the scientific community for years – boils down to something as simple as a hydrogen atom: is it there, or not? 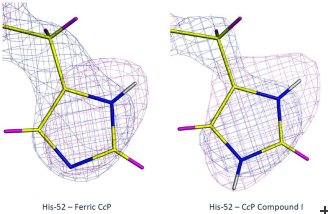 The controversy centres around a family of enzymes known as heme enzymes, due to the presence of a heme group in their active site. At the centre of the heme cofactor is an iron (Fe) atom, which becomes oxidised (ferryl) when a reacting heme is in an intermediate state called Compound I. The question that has remained unanswered for decades is whether this oxidation involves just an oxygen atom (O), or a hydroxyl group (OH). Resolving this fundamental question has implications for understanding oxidative processes within living cells, which is critically important for drug development.

Professors Peter Moody and Emma Raven from the University of Leicester, worked with Dr Matthew Blakeley, Dr Susana Teixeira and Cecilia Casadei from the Institut Laue-Langevin, along with scientists from the Maier-Leibnitz Zentrum (MLZ) and the University of Manchester to solve the mystery of the ferryl heme Compound I structure using a method that has not previously been applied to this problem: neutron crystallography. 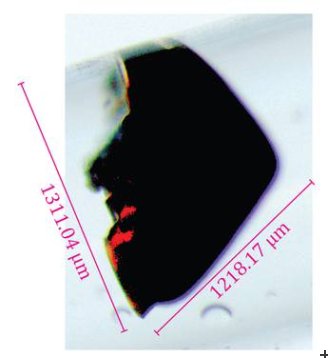 The enzyme used in the study was cytochrome c peroxidase (CcP), which was isolated, purified and then crystallised in preparation for the neutron studies. First the neutron structure of CcP in its resting state at room temperature was determined using data collected on the LADI-III instrument at the ILL. Next, a CcP crystal was reacted with hydrogen peroxide to form its Compound I intermediate and immediately cooled to -173° to cryo-trap the intermediate state. Then neutron data were collected on the Compound I crystal at cryogenic temperatures using the BioDiff instrument at FRM II, allowing the neutron structure of Compound I to be determined.

And the answer turns out to be… the ferryl heme in Compound I is not protonated. But, unexpectedly, the results showed that one of the amino acid side chains (a histidine) on the molecule is doubly protonated, which raises questions of its own in terms of mechanisms for oxygen activation in heme enzymes. 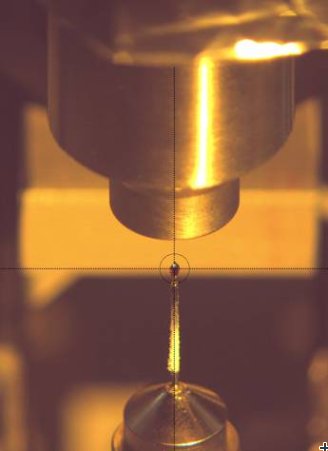 “Cryo-cooling of the large protein crystals that are required in neutron crystallography was traditionally considered a challenge”, said ILL PhD student Cecilia Casadei. “Our work shows the feasibility of this, enabling the low temperature capture of intermediate species in enzyme reaction pathways by neutron crystallography. The LADI-III instrument at the ILL and the BioDiff instrument at FRM II exploit the unique capabilities of neutron diffraction for the localization of hydrogen atoms in protein structures, which is so often essential for a full understanding of reaction mechanism and catalytic activity.”

“This research marks the first time a trapped enzyme intermediate structure has been determined using neutron cryo-crystallography, shedding light on a well-known but unclear catalytic mechanism.” said Matthew Blakeley, LADI-III scientist at Institut Laue-Langevin. “ Now we have the ability to collect data at various temperatures, this opens the way to address many more complex biological problems using neutron crystallography.”

“Finding out where all the hydrogens are is key to understanding the way enzymes work,” said Professor Moody. “The ability to capture intermediates at cryogenic temperatures combined with the information available from neutron crystallography, means that we can finally see them.”

“The exact structure of ferryl heme has been a long and difficult problem for the heme community to resolve,” said Professor Raven. “Through our collaborators in Grenoble and Munich, we have been lucky to have had access to excellent neutron beamlines in Europe, which has meant that we were in an excellent position to try new and different approaches that worked very nicely.

About ILL – The Institut Laue-Langevin (ILL) is an international research centre based in Grenoble, France. It has led the world in neutron-scattering science and technology for more than 40 years, since experiments began in 1972. ILL operates one of the most intense neutron sources in the world, feeding beams of neutrons to a suite of 40 high-performance instruments that are constantly upgraded. Each year 1,200 scientists from more than 30 countries worldwide visit ILL (2000 visits), to conduct research into condensed matter physics, (green) chemistry, biology, nuclear physics, and materials science. The UK, along with France and Germany, is an Associate and major funder of the ILL.