Tokyo, June 30, Researchers use diffraction data from pulsed high-intensity neutrons to understand the reactions that deteriorate lithium batteries during operation.

Despite the commercialisation of rechargeable lithium batteries in 1991, improvements to the reliability, safety, and long-term stability are still needed for their use in a wider range of large-scale applications. Now a collaboration of researchers in Japan have developed a technique they can use while the battery is in operation, which may shed light on some of the reactions that occur in these systems, providing insights for better battery design.

While techniques exist to monitor reaction dynamics, so far they have been difficult to apply on commercial batteries because of the stainless steel cans around them and their size. Ryoji Kanno worked with researchers at Tokyo Institute of Technology, High Energy Accelerator Research Organization (KEK), Sokendai (the Graduate University for Advanced Studies), and Kyoto University. They developed an in operando diffraction technique that uses pulsed high-intensity neutrons and a high-resolution high-intensity time-of-flight diffractometer to monitor the processes in the battery while it is in action.

The high current that results from pulsed operation causes inhomogeneous reactions and a lithium concentration gradient, so that relaxation processes then ensue once the current is turned off. With their approach Kanno and colleagues were able to detect this relaxation process in a commercial cell under high current drain, for the first time. They also noted structural changes that indicate differences between charging and discharging, and suggest the first observation of the lithium composition ranges used for the reactions at the electrodes shifting with the cycle rate.

They also point out that while balancing lithium concentrations between cathode and anode is key to battery design, the non-equilibrium reaction conditions may change these concentrations. Such changes are strongly correlated with the formation of a “solid electrolyte interphase”, and the deterioration of the electrodes. They conclude, “This information provides basic battery reaction data to clarify the deterioration mechanism during cycling and under high-temperature operation and storage conditions.”

The most common secondary — rechargeable — lithium batteries since their commercialisation 25 years ago, are the 18,650 cells. These are cylindrical, with an 18 mm diameter and 65 mm height, and are used in laptops and even electric vehicles. Their operation involves non-equilibrium reactions that occur in an electrode matrix composed of conducting agents, adhesive additives, and electrode materials.

The components of the batteries in the current study include the cathode (lithium nickel manganese cobalt oxide), anode (graphite), current corrector (aluminium, copper), and the battery can (iron)

In situ and in operando analytical methods that can be used to clarify the reaction mechanism for electrode materials during full cell operation, include energy-dispersive, X-ray diffraction, energy-scanning confocal X-ray diffraction, nuclear magnetic resonance, and small-angle neutron scattering. A technique that provides structural analysis at the same time would also help improve battery design.

Neutron scattering has advantages because the neutrons penetrate the stainless steel cans encasing the cell, and the technique can detect light elements such as lithium. However previous studies using neutron techniques had only revealed structural information for slow reaction kinetics and repeated data accumulation. Observing deterioration-related changes remained a challenge.

While size inhibits in operando application of other monitoring techniques, for neutron diffraction, larger sizes have advantages as there is then more material, so that high-quality high-intensity data can be obtained. The neutron diffraction technique used by the researchers was also able to cope with the high-current that results from the pulsed current operation in 18,650 cells.

Automatic data analysis is a prerequisite due to the large number of diffraction data sets these experiments accumulate. The researchers used Rietveld refinement to understand the obtained data. The fit of Rietveld refinement analysis data with previous records indicated that the auto refinement provides reasonable structural parameters for individual phases. It was then used to successfully reveal the reactions underway within the steel can. 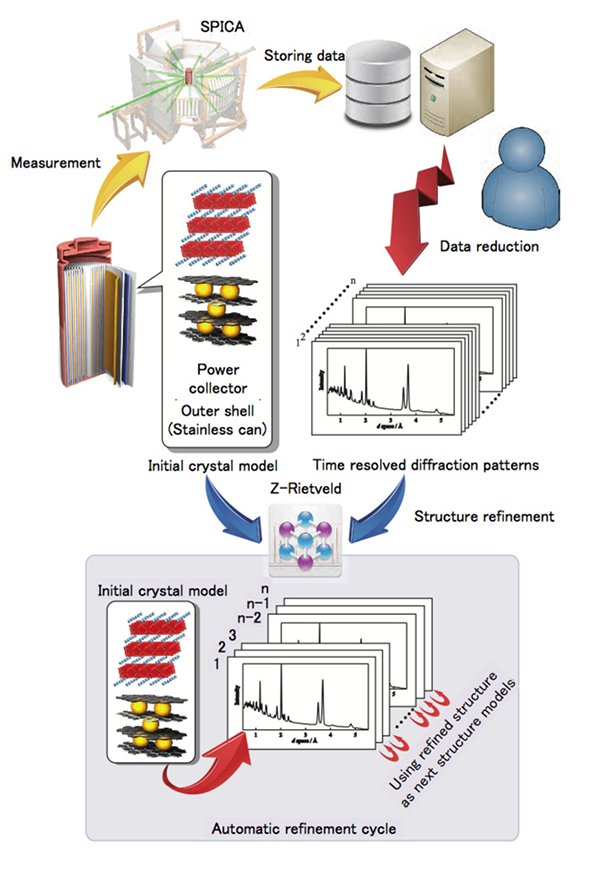